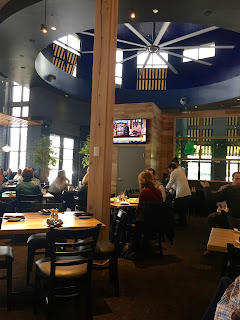 The exciting news for me is that today is the official opening of Momo's in Walnut Creek.

Momo's has been one of my favorite San Francisco restaurants since it opened across from AT&T Park in 1998, even before AT&T Park was completed (in 2000). It was one of the first restaurants in that neighborhood.

Momo's has thrived, under the direction of owner Peter Osborne. 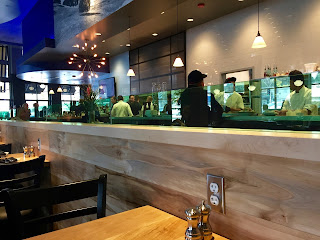 Today I broke my usual rule of waiting a few weeks, at least, before checking out a new restaurant. Jim and I had an early Valentine's Day lunch at the new Walnut Creek location today.  Reservations can be made on Yelp Reservations or by calling the restaurant directly. 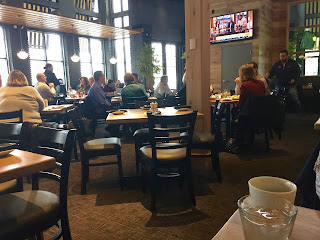 At Noon, the restaurant was bustling with a lunch crowd that looked to be made up of about half local business people and half locals, like myself.

My best description of the restaurant is "elegance, with a bit of sports bar."  Several TVs throughout the dining room broadcast sports and sports news.  But, the dining room and bar have the feel of a casual upper-scale dining spot.  There are electrical outlets on the walls along the windows and the walls separating the dining room from the kitchen area, making it easy to charge your mobile device or laptop, should you be doing business while dining or just in need of a battery charge. 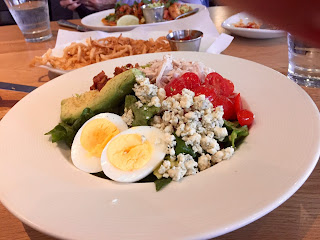 Jim had the Roast Chicken Cobb Salad. We shared an order of Onion Strings. 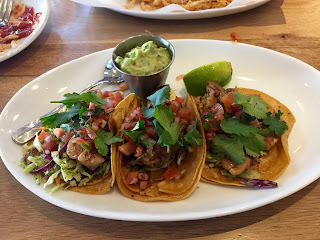 My choice was the Rock Fish Tacos. 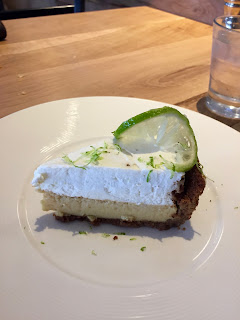 For dessert, we shared the Deep Dish Key Lime Pie.

To my delight, not only was the food tasty and reasonably priced for such an attractive dining spot, but, the service was outstanding.

Water was refilled regularly and Jim was offered refills on his coffee even before he thought to ask for such. 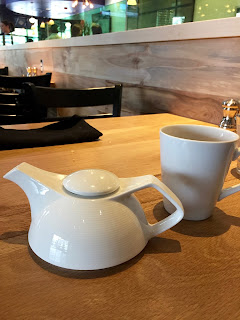 I appreciate Momo's Walnut Creek's attention to details.  Their choice of dishes, Tria's "Wish" pattern, adds to the elegance of the dining experience.

Owner Peter Osborne was there, overseeing the dining room and kitchen and meeting those of us who had come to dine.  He and his wife, Janet, were beaming like new parents.

I'll be back to Momo's Walnut Creek, very soon. 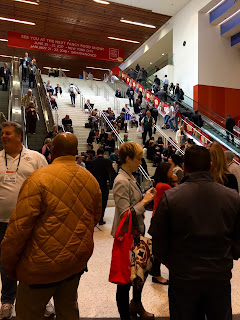 Fancy Food is a show for the food trade. Specialty food companies come to introduce new products and to widen their customer base of food stores, caterers, food distributors and restaurants. I go representing the press and always come away with a feeling for what foods are going to be popular in the next year and beyond, which ones endure from year to year, and which ones are no longer must have items. 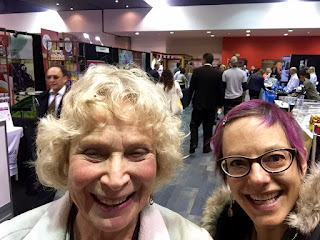 This year, my friend Janet joined me for our day of food tasting and discovery. 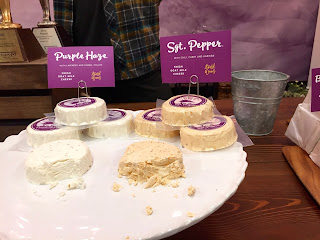 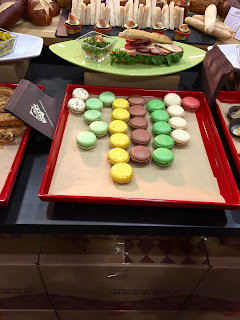 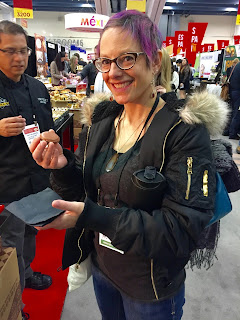 The colorful, flavored French Macarons continue to be a favorite sweet. Both Janet and I indulged. 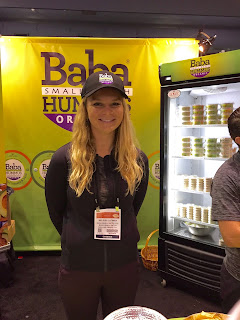 Hummus, in a wide variety of flavors, continues to be a popular dip/spread. Baba Hummus from San Luis Obispo was a newcomer to the show, introducing its handmade organic hummus. Right now, their hummus is in several California grocery stores and sold at many Central California Farmer's Markets.  Hopefully, since the show, it will be showing up in other parts of the country. 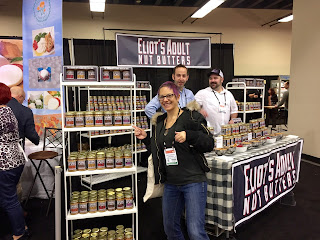 The most interesting nut butter that I sampled was the Peanut Butter & Co.'s Mighty Nut Powdered Peanut Butter.  The peanut butter can be reconstituted as a spread by mixing 1 tablespoon of water into 2 tablespoons of powered peanut butter.  It worked perfectly and tasted great.  I've also tried it simply sprinkled on my cereal or yogurt for an added protein and taste boost.  Many Bay Area grocery stores already carry this product and I highly recommend it both for at home and perhaps for your next camping trip. 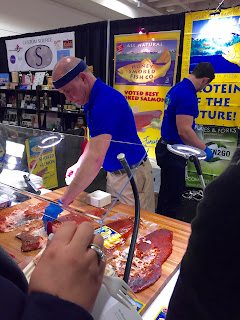 Smoked Salmon remains a popular fancy food and we indulged ourselves at the show. 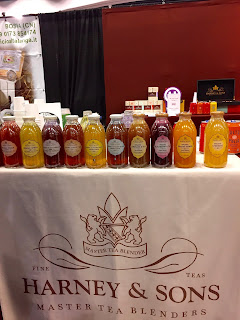 As always, there are a lot of tea companies at the show.  A trend towards flavored teas continues.  And, curiously, many longtime tea companies, such as Harney & Sons, have added bottled juice, tea,  and energy drinks to their repertoire. 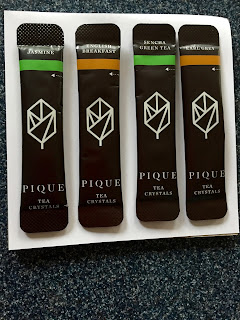 Pique, a San Francisco company, introduced its individual packet of tea crystals, packaged much like Starbuck's Via. Their teas are already in many Bay Area markets and even at Sports Basement. Just add hot or cold water to a packet of crystals, and you have a high quality tea to drink. 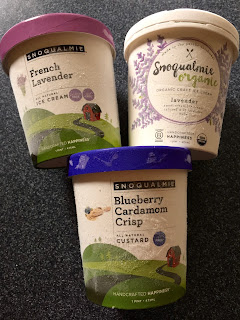 To my delight, Snoqualmie Ice Cream, from the state of Washington, was at the show to introduce its new Organic ice creams.  I discovered their French Lavender ice cream almost 5 years ago in some local supermarkets. But, these markets no longer carry it and I've been longing for it.  Now, they have two versions of their Lavender flavor. Hopefully, Snoqualmie has found some new Bay Area markets for its superior ice creams. Believe me, their lavender is THE BEST!!!  I know it was popular at the show because they had run out of samples of it by the time Janet and I found their booth. 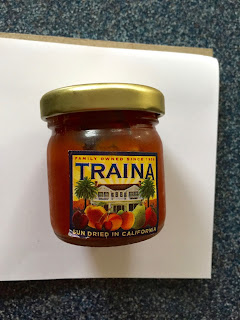 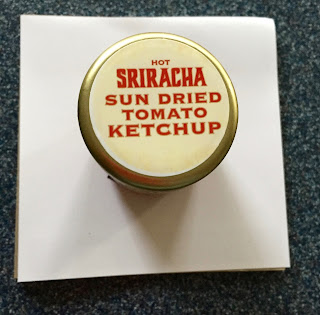 Last year I discovered Traina's tasty sun-dried tomato ketchup.  This year, they've spiced up their offerings to keep up with the enduring Sriracha trend with a new Sriracha version. 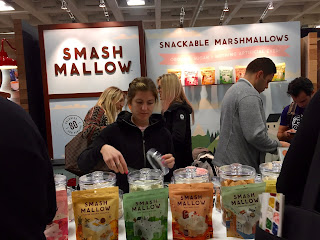 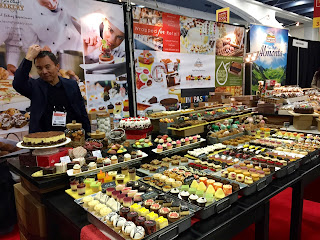 The array of confections at Fancy Food can be overwhelming.  We saw several Marshmallow vendors.  Could gourmet marshmallows be the "it" sweet for the coming year? 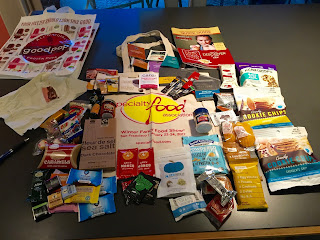 At this year's Winter Fancy Food Show, vendors were allowed to hand out packaged samples of their foods, rather than simply serving samples at their booths.  I was delighted to be able to take samples with me to taste and evaluate later.  Of course, most vendors also served generous tastes of their products at their booths as well. The above are some of the samples that I picked up. 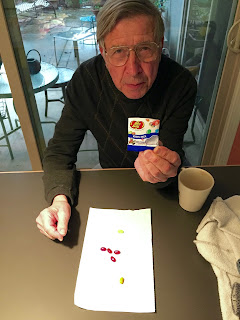 And, one last note, my in-house taster of all things sweet, was happy to do his analysis of Jelly Belly's Kid Mix Jelly Beans.

Posted by Where-To-Guide at 5:09 PM No comments: