A July of Lobster 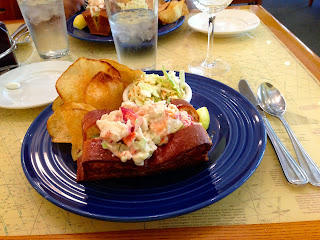 What can I say?

I love lobster, particularly lobster from New England. I didn't always love lobster. As a kid growing up in Massachusetts, there were certain times during the summer that lobster would be abundant and my parents would rush to the supermarket to buy lobster when it went on sale at ridiculously low prices...69 cents a pound is stuck in my memory.

In those days, they'd buy the lobsters live, drop them in a large pot of boiling water, head first (because, as my father pointed out, if you put them in tail first, they would jump out of the pot), and cook them until their color went from black to bright red. Then, they'd sit down at the table and methodically tear their lobsters apart and pick out every morsel of goodness.

To me, this was simply disgusting and I didn't even want to take a taste.

Fast forward about 20 years when my sister married a man from Maine and moved there.  One Sunday, after spending a day in Maine, on our drive back to Boston, I suggested to Jim that, just for the fun of it, we stop for dinner at one of the many Lobster in Rough places along the road.  At such roadside restaurants, you were served your boiled lobster on a wooden picnic table covered with newspaper. You had a nutcracker to crack the shells, your fingers, and maybe a lobster fork and you went at it.

On that fateful Sunday, my life turned around...From years of watching my parents eat lobster, I knew exactly how to "attack" a boiled lobster.  And, surprise of surprises, I LOVED the lobster.  Of course, by this time, lobster had become something of a delicacy and was never on sale for 69 cents a pound.

Since that day, many a year ago, I indulge in lobster only for special occasions and when some of my favorite restaurants have special lobster meals.

This month, July, I managed to enjoy 4 meals that featured lobster. 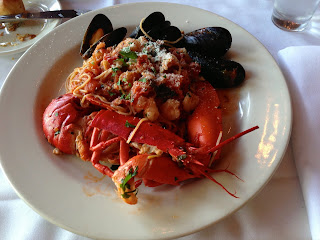 It started in early July when Il Fornaio's monthly regional menu, which featured the foods of Sicily, included half a lobster on spaghetti.  Of course, I was there to enjoy it.

Then, for my birthday, Dixie and Mary Ann took me to Yankee Pier for a lobster roll lunch. Yankee Pier always has the lobster roll on its menu and they make the lobster salad fresh from lobsters that they boil each day.  We all had lobster rolls at this lunch.  And, I think it was my best lobster meal of July...even their chips and cole slaw, which accompany the lobster roll, are better than those anywhere else that I know. 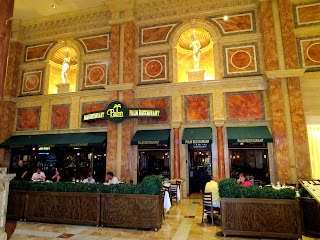 In mid-July, Jim and I headed to Las Vegas for a 4-day celebration of my birthday.  Each summer (through August 31), The Palm, who have one of their restaurants in Caesar's Palace, offers a lobster dinner for two for $79.95.  The Palm is known for its large lobsters (the smallest they serve weighs 3 pounds).  Their summer lobster dinner for two includes two appetizers and a 4-pound lobster to share, along with two side dishes of your choice.  As soon as I could, I reserved for the lobster dinner for two. 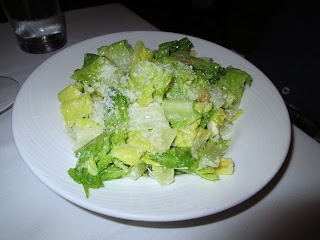 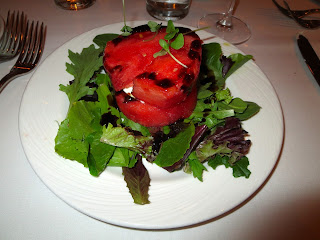 Our appetizer choices were Caesar Salad for Jim and Watermelon and Mozzarella Salad for me. 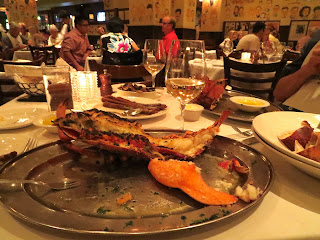 Sorry that this half lobster looks so pathetic...I had already eaten most of it when I realized I'd forgotten to take a picture. 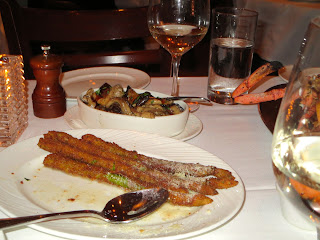 Our shared sides were Fried Asparagus and Sauteed Mushrooms. 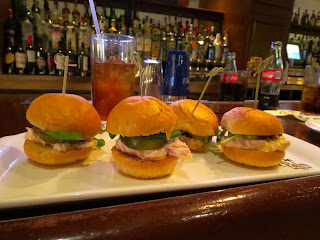 Three days before we headed to Las Vegas, I got an email from The Palm, announcing that Monday, July 15, the day we had our dinner reservation, was a special lobster day. All day long, in the bar, lobster sliders were being offered at $1 each and, in the dining room, a 3-pound lobster was going to be $45. At first, I panicked, fearing that they would sell out of lobster before we got there for dinner...The Palm is also known for its steaks, but I don't eat steak.  I called them to see if they would "save" a lobster for us and was assured that there would be plenty for us.

Once in Las Vegas, on Monday, July 15, after spending the morning at the pool at our hotel, I told Jim that I wanted to go have lobster sliders for lunch at The Palm.

So, off we went, got ourselves seated at the bar, ordered an iced tea for me and a Coke for him, and ordered 4 lobster sliders for our lunch.  Yum!!! Each slider was on a tasty mini bun and was filled with a delicious lobster salad, a slice of pickle, and a piece of lettuce.  Bar patrons could order as many lobster sliders as they wanted, all with just one drink. The two men sitting next to us, each had a beer and ate a dozen (!!!) sliders between them.

Nothing wrong with two lobster meals in one day; I'd do it again, if the chance presented itself.


And, as if by coincidence, at the Bellagio Hotel's Botanical Garden, part of the July floral theme included a working model of a New England lighthouse...just like I remember from my summers on Cape Cod. 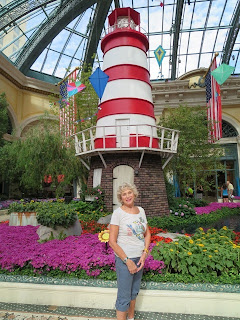 Posted by Where-To-Guide at 2:00 PM No comments: Links to this post 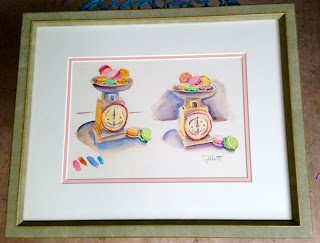 For at least the last 6 months, I've subscribed to a blog called "Paris Breakfasts."

I was introduced to it by my cousin Mary Jo who, like me, loves all things French.

Despite having my own blog, I'm a bit dubious about subscribing to blogs because I don't want to be overwhelmed with a lot of reading, as well as a lot of emails.

But, after taking a look at Paris Breakfasts, I decided to give it a try.  And, I'm hooked on it.

Five times a week, author, Carol Gillot, posts her photos, watercolors, and brief comments about her experiences living in Paris.  Carol is an artist/photo journalist from New York whose passion for France inspired her to actually move to Paris.  While she spends most of her time in Paris, she does travel a bit around France and, even recently, made a jaunt to England.

Where ever she goes, she blogs about it.  Each post includes lots of photos, brief commentary, and, often, her own sketches and watercolors of what she's observed.

Since Paris Breakfasts is a quick read, and my guilty pleasure, I avidly read each post, imagining that I'm there in France with her...also, she keeps me up on trends in France, which is always fun.

A few weeks ago she offered some of her watercolors for sale on Etsy.  Several of her pictures were of the French macarons, a sandwich cookie of two round pastel-colored meringue cookies with a frosting filling. The color of the macaron relates to its flavor...yes, they do come in green which usually is a pistachio macaron. They are nothing like, and should not be confused with, the coconut macaroons that we Americans are accustomed to eating.  The macaron is catching on in the United States and several San Francisco area bakeries are now making and selling them. My favorite local places for macarons are Miette in the San Francisco Ferry Building and Tout Sweet in Macy's on Union Square in San Francisco.

This watercolor of macaroons being weighed on scales is the picture that I purchased. I just got it back from my framer (Clayton Valley Frameworks), who creatively picked up the colors of some of the macarons with a pink mat and a green frame. Now I have a happy and tasty bit of Paris in my home.

Posted by Where-To-Guide at 4:12 PM No comments: Links to this post