Today is Thanksgiving and I will say that I am most Thankful for the special people in my life. 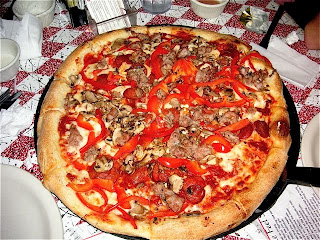 Jim & I started our Thanksgiving last night with Pizza at Rocco's with our friends the Harpers. Two of the Harpers were home from college and this was a nice way to get together for a visit. 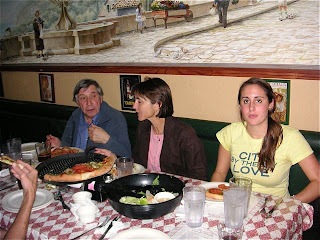 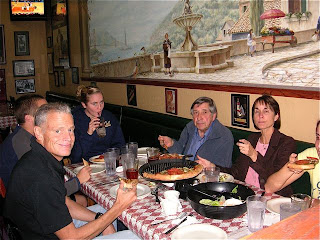 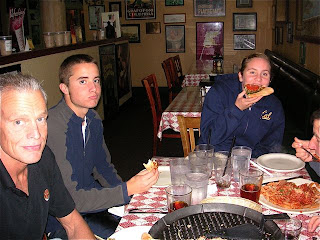 Today we cooked at home and our friend Ted joined us. Ted brought a steaming Persimmon Pudding which was our dessert. You can even see the steam rising from it here. 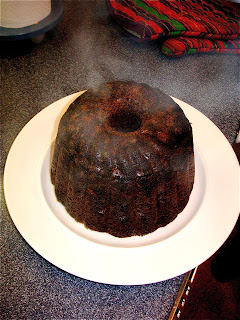 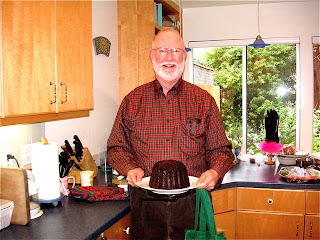 Our meal started with drinks and veggies, white bean hummus, cheese & crackers. Would you believe that these two were drinking Navarro's Gerwurtztraminer Juice and not real wine with alcohol? 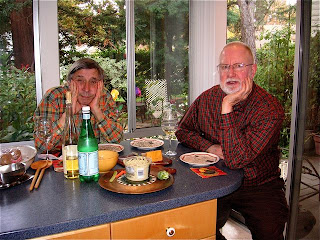 Our meal was a Spinach & Pear Salad, Rolled Turkey Breast, Sweet Potatoes with Maple Glaze, Sausage Stuffing, Two kinds of Gravy (Apple Cider Gravy made by me and Whole Foods Gravy from a jar), Cranberry Orange Relish, and Whole Wheat Rolls. Ted's Persimmon Pudding, with a dollop of crème fraiche was a lovely end to a delicious meal and visit. 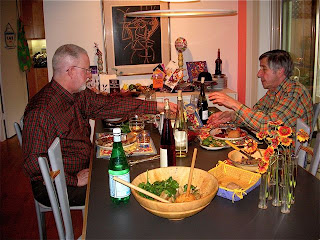 A good part of today's meal was made by Trader Joe's...The Trader certainly knows how to cook! 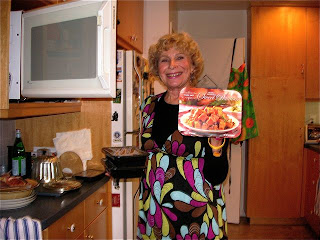 Give thanks for those things that enrich you life.
Posted by Where-To-Guide at 7:56 PM No comments: Links to this post 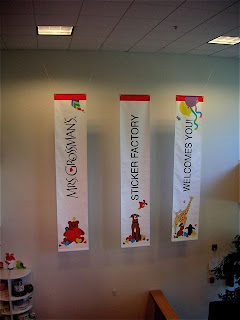 I can't think of anything that stickers and chocolate have in common, but that's what a good part of my day involved. 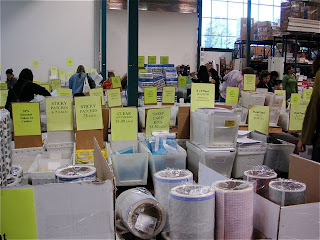 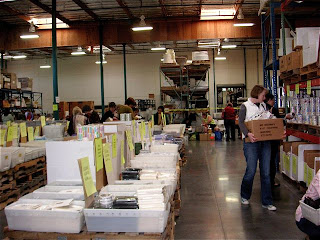 In their upstairs retail store that is open throughout the year, everything was discounted 20%, except for decorated items made by employees, which were being sold at full price.

I shopped both areas and came home with a bag full of stickers, papers, journals and more.

Of course, some of the doggie employees were keeping watch in the warehouse. 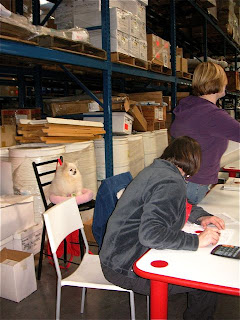 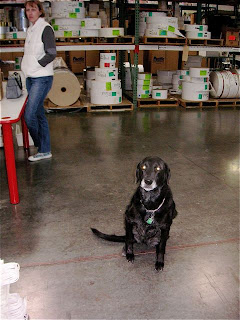 Mrs. Grossman's is a dog-friendly workplace where employees are welcome to bring their dogs to work.

From Petaluma, I drove to Berkeley to Chocolatier Blue, a new premium chocolate shop. 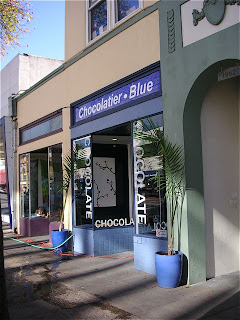 Owner Chris Blue creates his chocolates using the finest chocolate in the world. Many of his fruit fillings are made with organic fruit that he purchases at his local Farmer's Market. While I chose my small selection, I sampled a Lemon Chocolate.

My selection, from left to right is Tangerine, Palet d'Or, Lime, Pumpkin, and Eggnog...These will be the little something sweet at the end of our Thanksgiving dinner. 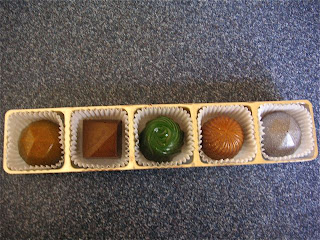 Chocolatier Blue chocolates can be purchased by the piece for $1.50 each. Gift box selections are also available. Coming up on December 7 is Chocolatier Blue's 1st Annual Chocolate Festival..it is at the shop from 5 to 7 p.m. The cost is $15 and that includes chocolates, hot chocolate, entertainment, chocolate desserts, and some special surprises. 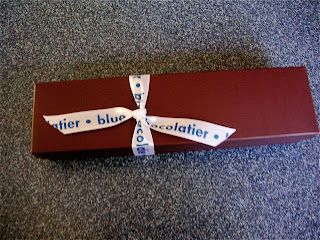 Posted by Where-To-Guide at 3:39 PM No comments: Links to this post 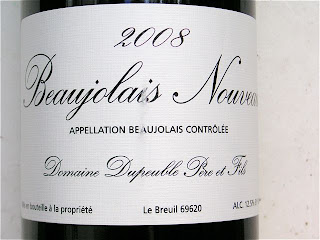 In other words: " The New Beajolais has arrived!"

Today is the day that France releases its new Beaujolais wine for the year. The tradition is that Beaujolais Nouveau is released each year on the third Thursday of November.

While this young wine is usually nothing special, because it is pretty much grape juice, with virtually no aging, it gets a lot of publicity.It's pretty pricey too...I just bought mine from Kermit Lynch in Berkeley for $14.99 a bottle. I will drink some tonight and open a second bottle with my Thanksgiving dinner. The Nouveau is a wonderful wine with turkey.

One thing to remember when drinking the Nouveau...it is about the only red wine that should be drunk chilled...give it a few hours in the refrigerator before serving.

In the San Francisco Bay Area, many restaurants and wine shops have special meals and tastings based on the arrival of the Beaujolais Nouveau. They have kegs of the new wine flown in directly from France...it is put on an airplane in France right after midnight on the third Thursday in November and usually is ready for eager Nouveau fans in the United States to taste by noon. I expect other parts of our country have similar celebrations.

This morning's news described it as having a lot of raspberry taste. 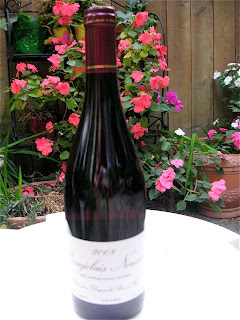 I choose Kermit Lynch for my Nouveau and for many of my French and Italian wines because he is the most reliable and honest wine importer that I know. He and is staff personally visit the vineyards from which they import. He does his own shipping to assure that the wines taste as good when they arrive at his shop in Berkeley as they did when he tasted them at the winery. Many of his wines come from very small family-run vineyards.

His monthly newsletter is so well written that I feel like I was with him while he selected the wines being discussed. His newsletters always make me want to jump in the car and drive to Berkeley to buy the wines he describes...I am never disappointed.

Kermit Lynch's Beaujolais Nouveau is available, while it lasts, at several Northern California wine shops, including some in Davis, Sacramento, and Tahoe City.

All the wine stores that are selling Kermit Lynch's Nouveau are listed in the current Kermit Lynch newsletter which you can download from the store's web site. I suggest calling before heading out to buy some...it sells out quickly. Jackson's Wine and Spirits, near me in Lafayette, had about 120 bottles to start and I will guess that they will be gone by the end of today.

In a few days, if not today, you will be able to find other bottlings of the Nouveau at such places at Cost Plus, Trader Joe's, and probably your local Safeway. It's fun to buy several different bottlings and open them all a once for a comparative tasting. One of the most popular bottling usually comes from Georges DuBoeuf, whose specialty wine is Beaujolais, new and older ones. His Nouveau is usually priced at about $10 a bottle. This link will take you to a web site where you can locate a Nouveau event near you; it includes a lot of fun facts and tips about the Nouveau too.

Some American winemakers also have Beaujolais Nouveau offerings. All the more to sample!

A votre santé!
Posted by Where-To-Guide at 11:29 AM No comments: Links to this post 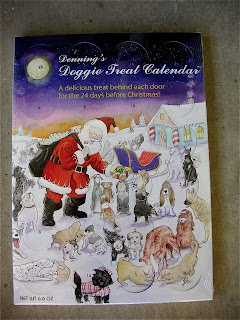 High on my Holiday gift list are the pets in my life, both my own and those of friends and family. 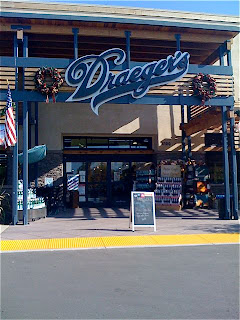 This calendar was such a success as a doggie gift last year, that I just purchased several for Louie to hand out to his doggie friends for this Holiday Season.

The Doggie Treat Calendar is a doggie version of an Advent Calendar. It has 24 punch-out doors on a holiday scene with Santa delivering gifts to dogs of just about every variety. Behind each door is a healthful doggie holiday cookie. So, for each of the 24 days before Christmas, while you might be eating candy from your own Advent Calendar, your dog will be enjoying a daily treat.

This particular calendar is manufactured by Open Door Products in Corte Madera, Calfornia. The treats are from Simon and Huey's LLC-Dog Treats. At Dreager's the calendars sell for $12 each. They can also be ordered by the case of 12 directly from Open Door...price is less but you will have to pay for shipping.

I bought our calendars at the Draeger's at Blackhawk Plaza in Danville.

It has been a few months since I was last at Blackhawk Plaza and I was reminded of what a beautiful and bucolic place it is. Anchored by the Blackhawk Automotive Museum, Blackhawk Plaza has many shops and restaurants as well as a mulitplex cinema. 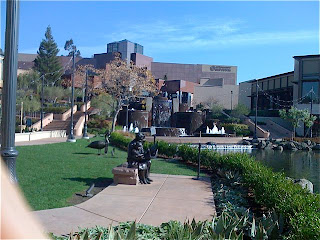 It's a great place for Holiday shopping or shopping any time of year. The Blackhawk Museum contains a unique exhibition of about 90 vintage cars that are displayed in two large galleries. The Museum also has an Automobile Reference Library and features other temporary exhibits, many of which are related to things automotive. Whenever my Dad visited me, a day at the Blackhawk Museum was a must-do on his list.

One of the new shops in Blackhawk Plaza is Anthropologie, a large store with clothing and accessories for women and a nice selection of gift and decorative items. 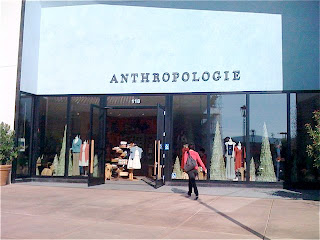 One more note about shopping at Draeger's: It's a great place for gifts as well as for all the foods and wines you might need for your holiday entertaining. If you don't have the time or inclination to cook, they feature a tempting selection of freshly-prepared dishes. As for gifts, their Home department features paper goods, China, Crystal, and other items that are as nice, if not nicer than those at fine gift shops. I may return to buy some of the Vietri Christmas plates and bowls that they are currently featuring. The added apoeal to shopping at Draeger's is that all their stores have plenty of free parking.

Happy Shopping!
Posted by Where-To-Guide at 2:11 PM No comments: Links to this post