From my days of writing the Where-To-Guide newsletter, I am still on the media contact list of many publicists.

I just learned that Nike is opening a new Clearance Store in the Marina Square Shopping/Outlet Center in San Leandro..in fact, the store opened today!

Since I love Nike clothing and accessories, I always stop at the Clearance Store in Vacaville CA, when I go to Davis, Sacramento, or Tahoe. Marina Square is closer to my home, so I am excited about being able to shop for bargain Nike stuff more often and easily.

The Grand Opening of the store is April 17 and April 18, with lots of gifts and prizes for those who visit.
Posted by Where-To-Guide at 4:19 PM No comments: 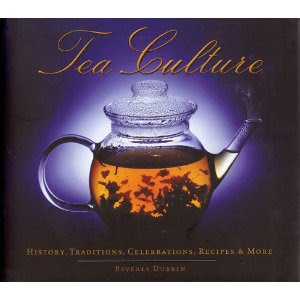 Many of you know that I have been awaiting the release of my new book, Tea Culture.

Well, it is finally here...in bookstores and on online booksellers in the entire English-speaking world.

Having seen the book in all its stages of production, I had a pretty good idea of what it looked like. But, when I finally had a copy in my hand, I was surprised and delighted at how beautiful it actually is.

In hard cover, Tea Culture's focus is on tea in modern day culture. It discusses all the different kinds of tea we have available to us. The debate over tea bags vs. loose tea is addressed. Herbal teas, or tisanes, are described. How green tea differs from black tea differs from blue tea or yellow tea or white tea, are explained. There is a section on possible health benefits of teas (yes, they do contain anti-oxidants, but so do fruits and vegetables). And ways to socialize with tea are explored. I've even discovered a company that creates art from used tea bags! To set the stage for tea in our modern lives, I provide a brief history of tea and tea ceremonies. 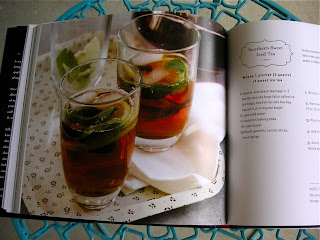 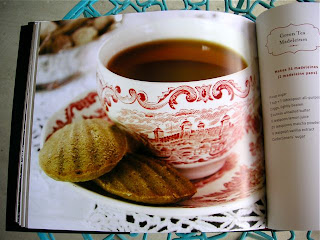 And, there are lots of tasty original recipes for tea drinks (hot, cold, and alcoholic), as well as recipes for foods to enjoy with your tea.

Tea Culture is beautifully illustrated...so beautiful that some people are treating it as a coffee table book.

I am keeping two copies for myself..one for the kitchen and one for my coffee table. I'm so proud of it!

The price in the United States is $18.95; some booksellers, Amazon.com in particular, are discounting it.
Posted by Where-To-Guide at 3:09 PM 1 comment: 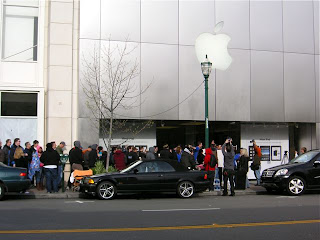 Well, this morning dawned a bit overcast and cool. But that did not stop me from my mission: It was off to my local Apple Store for its 9 a.m. special opening for the first day of the iPad.

While I had not pre-ordered an iPad, nor was I planning to purchase one today, those crazies of us with Apple in our blood, attend these events, whether we are buying or not. So there I was, camera in hand, greeting some of my former colleagues from the store. 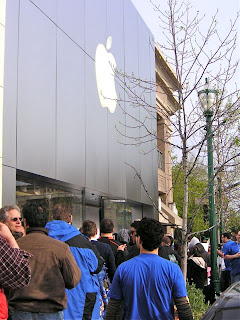 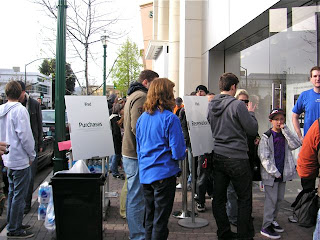 At about 8:55, the store staff walked the line, high-fiving those in line, some of whom had been there all night. Even with a reserved iPad, there is that weird desire to be the first to get one. 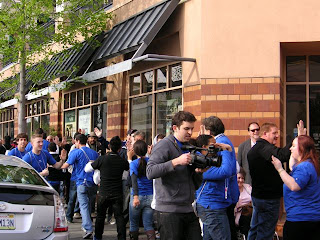 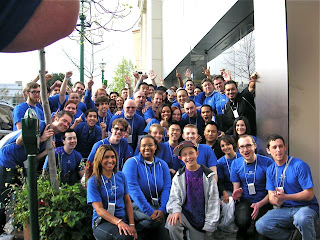 Unfortunately, even though all I wanted to do was look at and touch the iPad, I was not allowed in the store until its usual 10 a.m. opening time and even then, I had to beg to get in...the plan was to keep the store traffic under control and to have staff dedicate itself to selling and setting up iPads.

With about an hour to spare, I went down the block to Barnes & Noble to have a cup of tea in their café. While sipping my tea and checking my email on my iPhone, I noticed a young man working on his Apple MacBook computer. After a bit, another customer came over to him and, as their enthusiastic conversation got louder and louder, I realized that they were talking about this guy's new iPad that he had just picked up!!!

So, I gathered up my stuff and went over to talk to them. This photo shows the iPad next to an iPhone. 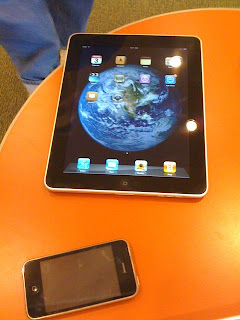 This is the first iPad I've ever touched.

After the three of us chatted, as only Apple nuts do, for about half an hour, I headed over to the Apple store.

One of my reasons for not wanting to buy an iPad right now is/was that I am looking for something lighter than my laptop in weight, but with most of its capabilities. I didn't think the iPad was "there" yet. A big deal for me when I am traveling is to be about to download photographs from my camera to the laptop. I knew that the iPad does not have a USB port, but what I did not know is that there is an accessory, the iPad Camera Connection Kit (available late April) which provides two ways to import photos and video from a digital camera: each of the two connectors in the Kit plugs into the dock connector on the iPad; one can connect to your camera's USB cable and the other holds the SD card from your camera. Wow! And, only $29 for the Kit.

My first impressions: The iPad feels far lighter to me than the first Kindle I ever held. Images on the screen are crisp and vivid. Scrolling though the one book that comes loaded free on all iPads, is amazing; it is just like paging through a book in hand. Typing on the keyboard is very close to real typing on a real keyboard. Oh, and the screen size is not that much smaller than the screen on a 13" MacBook.

Will I buy one? Very possibly...I still have a few more questions to get answered, but one thing I know for sure, Spring is here and I'm in love AGAIN.
Posted by Where-To-Guide at 2:04 PM 2 comments: