My Best Restaurant Meal EVER! 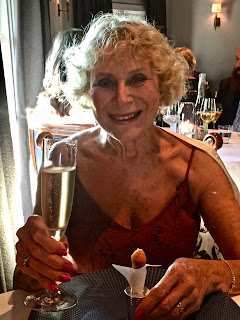 Jim and I recently celebrated our wedding anniversary with a dinner at The French Laundry, renowned chef Thomas Keller's restaurant in Yountville, California.

It's not the first time we've had dinner at the French Laundry.  In fact, we have been patrons of this special restaurant since sometime in the 1980's, long before Thomas Keller took over in 1994.

When we first discovered the French Laundry, Sally and Don Schmidt were the owners. Each day, they served a fixed price multi-course meal that featured fresh, seasonal ingredients.  In those days, your dinner reservation pretty much gave you a table for the evening at this small two-story restaurant in a stone cottage. Between courses, we were encouraged to walk around the grounds, wander through their gardens, and chat with the staff, many of whom were Schmidt family members.  When we ate here, we felt like family and, even after the Schmidts sold the restaurant, we remained in touch with them and regularly saw them at their Apple Farm in Philo, California. We still stop there to buy apples when we are driving to and from Mendocino and I took several cooking classes from Sally and her daughter Karen Bates.

When Thomas Keller took the helm at the French Laundry, we were among the first to dine there. Initially, we felt that the dining room had become pretentious and that we were rushed through our very expensive dinner so that another group could be seated at our table.  But, because, Keller's cuisine was creative and unique, we did go back for a few more times.

It has been about 20 years since the last time that we dined at The French Laundry. Since we vacation in Yountville for a week every year, we've watched the restaurant and its kitchen going through several remodels. It was time for a return visit....

Until this year, getting a reservation at the French Laundry was a challenge in and of itself.  But, this spring, they came up with an online reservation system that has a link from their website.  On the first day of each month, at 10 a.m. California time, reservations for three months ahead are made available.  Thinking dinner here would be a treat for this year's anniversary, I took on the reservation challenge and got online on May 1, promptly at 10 a.m., to reserve for August.  And, I got a reservation for the day of my choice!  To discourage no-shows at this ever-popular restaurant, it is necessary to prepay at the time of reserving ($310 per person for the basic nine-course meal). 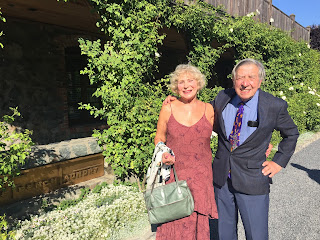 And so, on a balmy August 2017 evening, we arrived for dinner at The French Laundry, and what I consider the best restaurant meal I've ever experienced.

From the time we arrived, we were made to feel welcome, comfortable, and very special. The service was impeccable and never felt pretentious.  As each course was served, our servers described the dish in detail and told us the origin of the main ingredients.  No ingredient is used more than once throughout the entire meal.

We never felt rushed.  We were encouraged to wander out on the balcony or on the grounds between courses. Our dinner lasted about three hours and was perfectly paced. 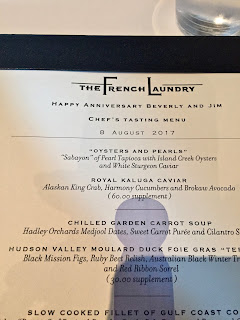 When I got a call a few days ahead to confirm my reservation, I was asked if we were celebrating anything special.  I told them it was our anniversary dinner.  Our menus were personalized for our occasion. And, once we were seated, they brought us each a glass of sparkling wine.

Interestingly, some of Chef Keller's signature dishes are still being served.

Before our first course, there was an Amuse Bouche (single-bite hors d'oeuvres) of two signature dishes, 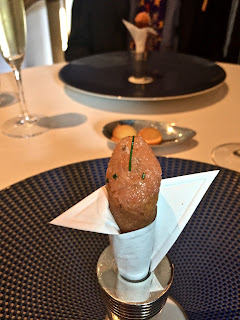 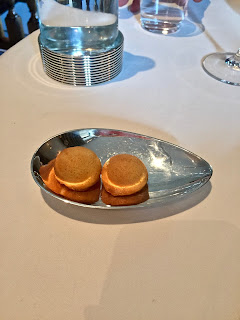 Here's the rest of our dinner, course by course:


First Course: "Oysters and Pearls," a "Sabayon" of Pearl Tapioca with Island Creek Oysters and White Sturgeon Caviar. This dish is another of Chef Keller's signature dishes. 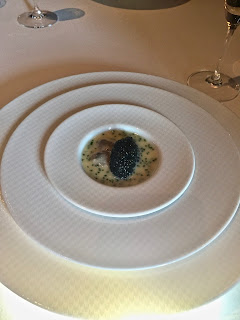 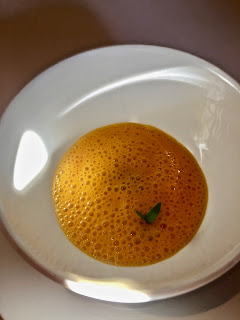 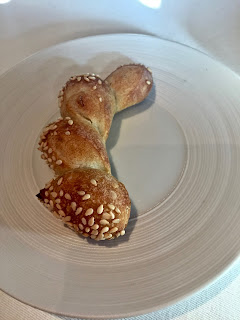 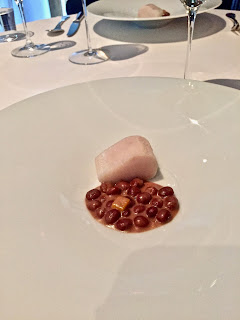 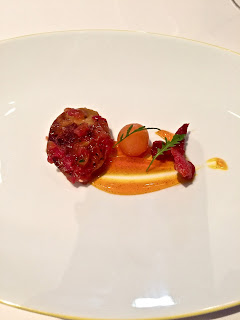 Fifth Course: "Bread and Butter," an Applewood Smoked Bacon and Onion Brioche served with Diane St. Clair's Animal Farm Butter.
(The bowl in which the Brioche is served is worthy of it's own photo, I think) 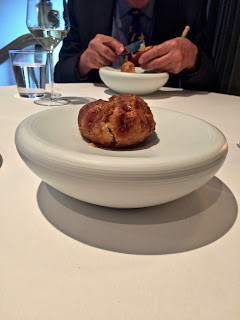 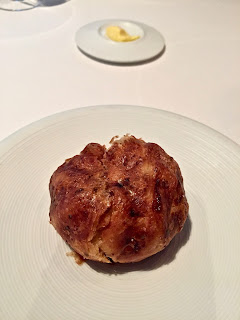 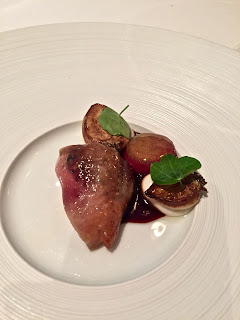 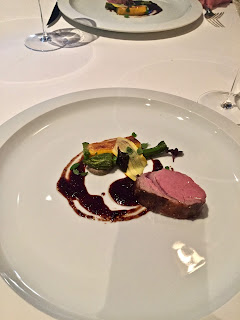 Eighth Course : The Cheese Course: "Cheesecake" (for our dinner, "Etude" cheese from Andante Dairy in Petaluma, California, was used) 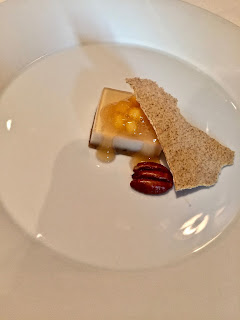 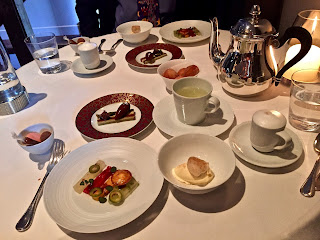 The first photo that follows is a closeup of "Coffee" part of another of Chef Keller's Signature dessert dishes: "Coffee and Donuts."  The Coffee is a Cappuccino Semifreddo and the Donuts are Cinnamon-Sugar Donut holes.  All the other elements of the dessert course were new to me. 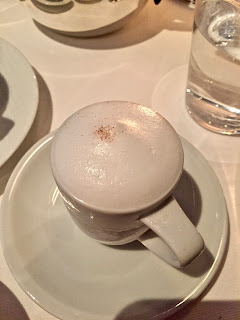 Here are detailed photos of the other desserts: 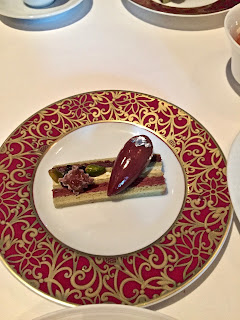 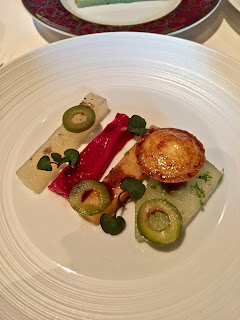 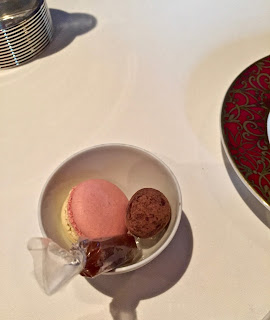 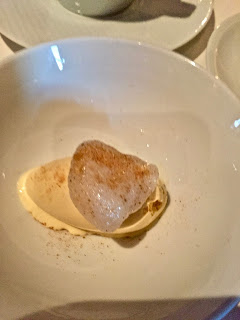 Right before the very grand dessert, we were each presented with a housemade white chocolate kiss (a la Hershey's style), wrapped in gold foil and with a paper tag that says "Happy Anniversary." 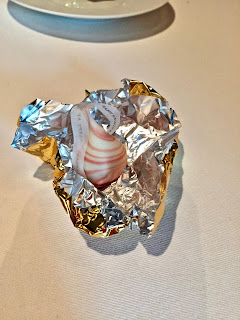 We got to tour the kitchen. 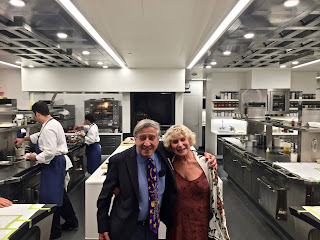 And, to take home, we were presented with a folder with copies of our menus, a booklet about many of the purveyors who provide the French Laundry with the ingredients used its meals, a tiny tin containing four shortbread cookies, and a miniature chest of chocolate truffles, one of each flavor. 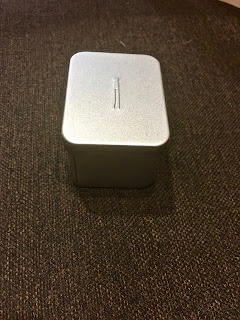 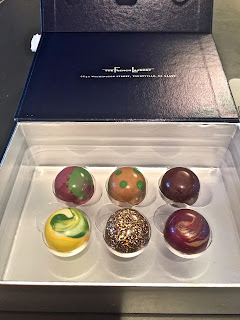 The French Laundry serves dinner each day and lunch on Friday, Saturday, and Sunday.  For some of the courses on the daily nine-course tasting menu, there are other choices for which there is a supplementary charge.  An optional nine-course vegetable tasting menu is also offered for the same basic cost.  Wine and spirits are offered from a very extensive list, priced accordingly.  Guests are welcome to bring bottles of wine that are not represented on the restaurant's wine list for a fee of $150 per 750ml bottle.

Will I return soon to The French Laundry?  Most certainly.  It is a restaurant for a special occasion and I can't wait for my next celebration there. 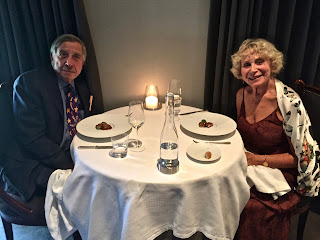 Posted by Where-To-Guide at 2:46 PM No comments: