I've been in Toronto for the past week, visiting with my friend Jarka and doing a lot of sightseeing.

Jarka is the perfect host, assuring that my every waking moment was filled with activities. 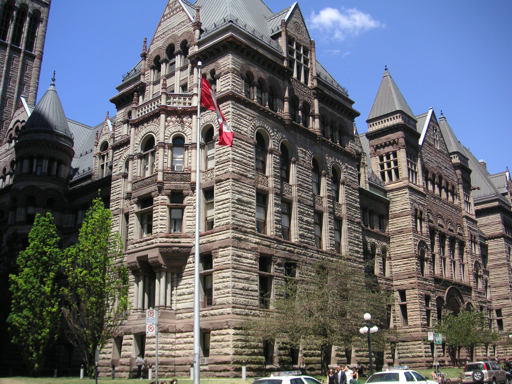 On our first full day together we went downtown on the subway, starting our day at the Eaton Centre, an extensive shopping galleria.

On one side of the Eaton Centre is a flock of suspended sculptures of Canadian Geese. 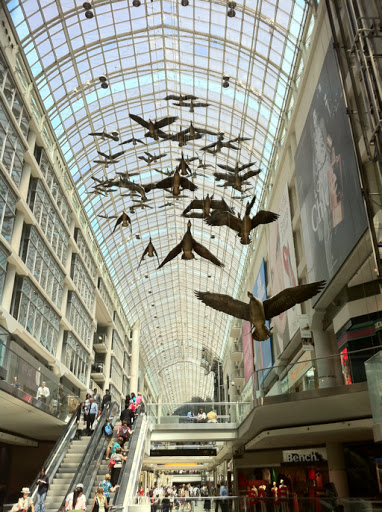 Our walking tour continued to the Old City Hall. 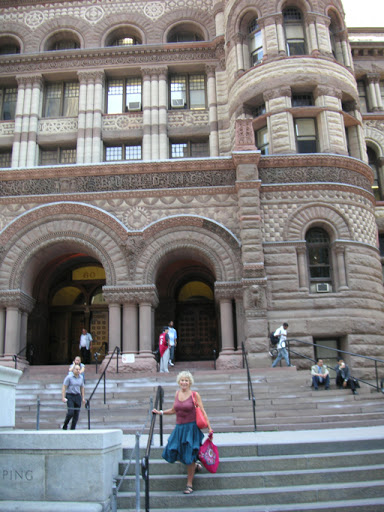 And on to the plaza in front of the new City Hall where a noontime free concert was going on. Tasty Thursdays attract even more people to the Plaza for lunch from of the many food stands that are here during the summer at lunchtime on Thursdays selling a wide variety of dishes, all priced at no more than $7 per serving. Most of the foods were Ethnic, providing a wonderful opportunity to try new and different cuisines.

Walking around Toronto, I was amazed at the number of different languages I heard spoken. Even in Jarka's neighborhood, on a warm evening, it seemed that the conversations in every neighbor's back yards was a different language. Toronto may be even more of a melting pot than San Francisco.

We know nothing about Malaysian dishes but were intrigued by these prepared-to-order stuffed crepe-like creations. We were pleased with our tasty selections. 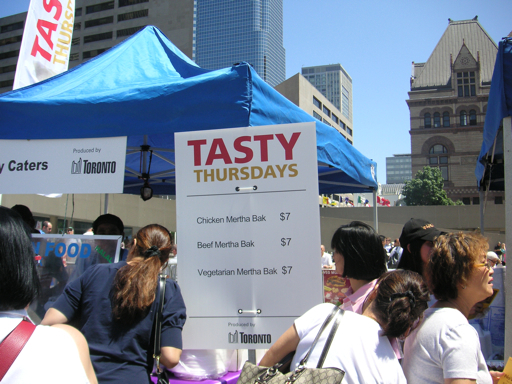 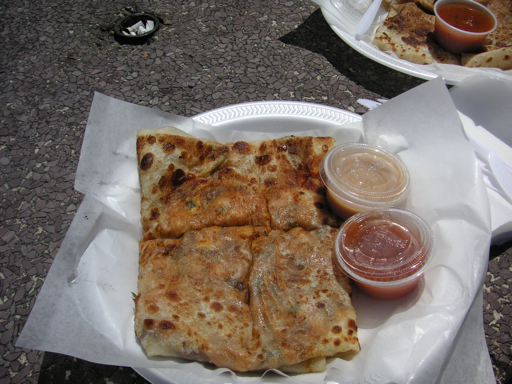 We enjoyed our al fresco lunch while listening to the music of the day's featured group, The Abrams Brothers. 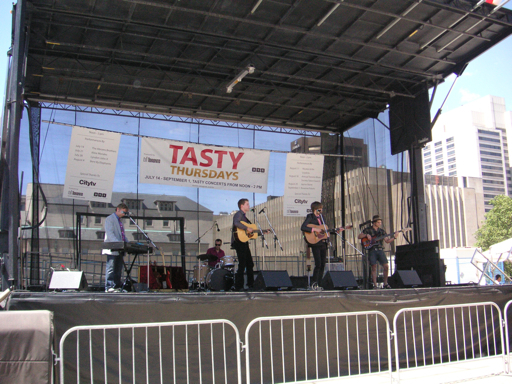 Our next destination was Yorkville, a part of Toronto that I particularly remembered enjoying from my last visit 7 years ago. Yorkvillle has lots of unique restaurants and shops.

Throughout my visit it was very hot, with daytime temperatures well into the 80s and, by the end of my stay, over 100 degrees. I was walking in sandals that, because of the heat, were starting to blister my bare feet.

Once in Yorkville, I made an emergency stop at the Lululemon shop to purchase pair of socks which I put on immediately in the store. Not exactly a fashion statement, but my feet appreciated the socks. 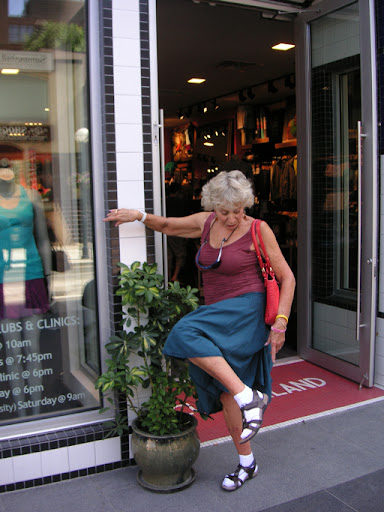 To further cool off,we stopped for drinks on the patio of a place called Hemingway's 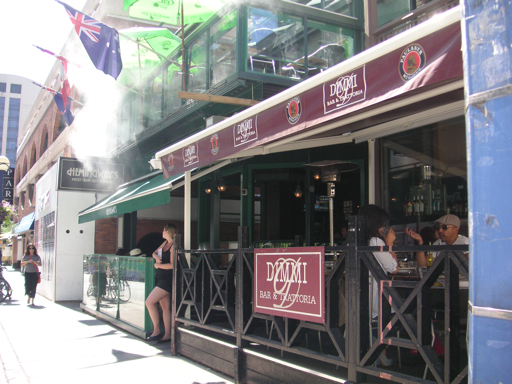 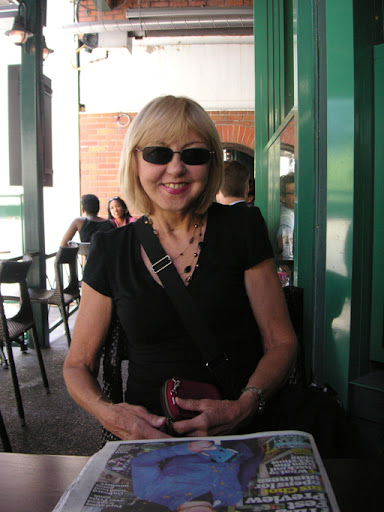 Our final stop of the day was the Bata Shoe Museum. On Thursdays, after 5 pm there is free admission..a donation suggested. Jarka is Czech and told me that Mr. Bata was also Czech. The Bata Shoe Company was founded in 1894 by Tomas Bata Her father worked for Mr. Bata as a "Bata Man." The company is said to have been very paternalistic to its employees and the communities where its factories were located. The Canadian connection dates back to 1939 when the founder's son, Thomas J. Bata moved to Canada, in anticipation of World War II to establish the Bata Shoe Company of Canada.

We enjoyed several hours, viewing exhibits of shoes through the ages. My favorite gallery was the one dedicated to the Roaring Twenties. 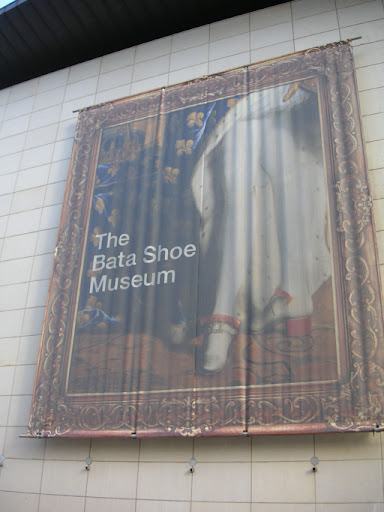 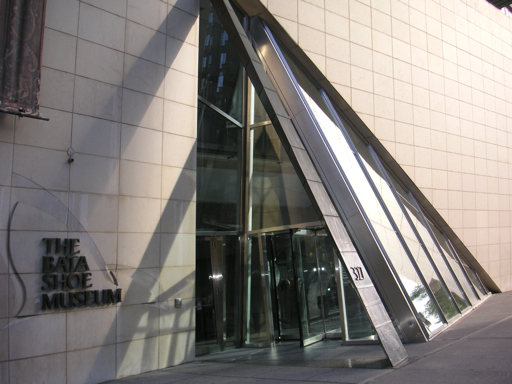 For all my shoe-loving friends, I'm including this photo of a Louis Vuitton shoe trunk which ladies of the era took along when they traveled, assuring that they had the appropriate shoe for every occasion. 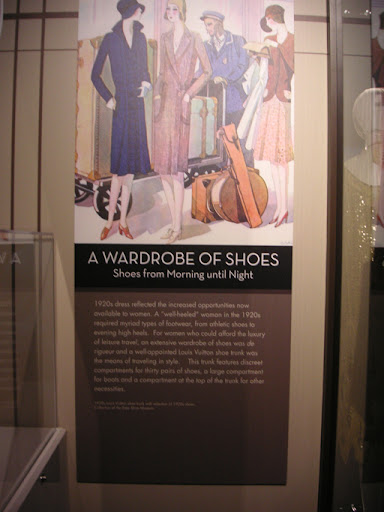 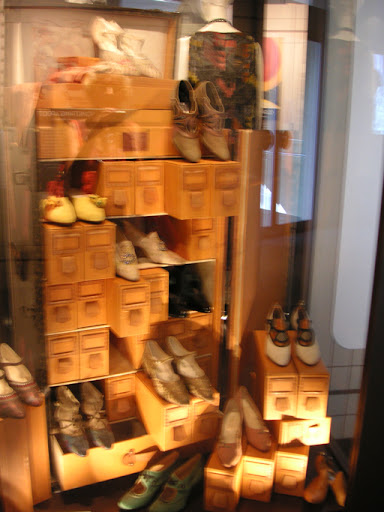 My next few posts will be about other outings in and around Toronto.

Posted by Where-To-Guide at 4:09 PM 2 comments: Links to this post

Tales of The City in San Francisco 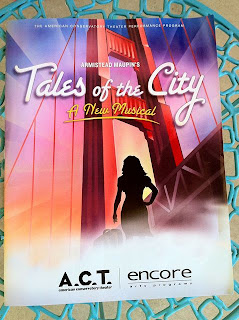 I came to San Francisco in the early 1970s. So did writer Armistead Maupin.

In 1976, he was writing for the San Francisco Chronicle and began a series of columns on San Francisco life called "Tales of the City."

I, and all of my friends were regular readers/followers of his columns...it didn't matter if we were gay or straight; we lived here and in one way or another, we related to the experiences and adventures of his characters, all of whom were modeled after Maupin's life in San Francisco.

Two years or so later, "Tales of the City" was compiled into a book. There were sequels to the book as well. And, "Tales" was a television series as well, I think on PBS.

And now, "Tales" is being performed as a play by San Francisco's ACT (American Conservatory Theater).

Harriet and I went to see it yesterday, and it is WONDERFUL and, for us, nostalgic too. I am sure it will move on to New York and who knows where else. But, for now, San Francisco is the only place to see it. It is three hours long and what an amazing three hours this it.

We went to a matinee and afterwards, had an early dinner at the nearby Daily Grill, one of my favorites for reasonably-priced meals in downtown San Francisco...we both had the Chicken Pot Pie, after sharing a Caesar Salad. And, yes, we both ate just about all of our pies!!! 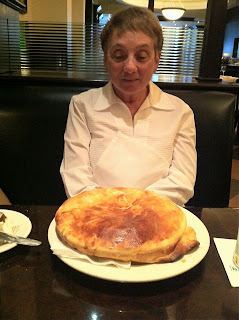 A perfect afternoon for good, longtime friends.
Posted by Where-To-Guide at 5:10 PM 1 comment: Links to this post 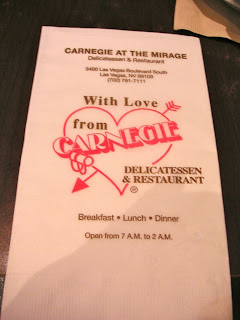 Our last evening in Las Vegas was our most memorable.

We first had an early dinner at the Carnegie Deli in the Mirage.

Remembering the last time we ate at the Carnegie Deli, we knew that their sandwiches are larger than most "normal" people can consume. We ordered just a simple Corned Beef on Rye (not one of their fancy combination sandwiches) and willingly paid the extra $3 to share it. 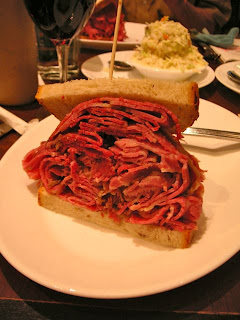 But, we still wound up with more food than we could eat. We wanted at least one side dish and asked our server how big the portions were. She said that the sides are served in the same size dish as the one in which the complementary pickles are served. Looking at the reasonably-sized pickle dish on the table, we decided to order two sides: Potato Salad and Cole Slaw. Surprise! The sides may be served in the smallish dish, but the serving is piled dangerously high vertically in those dishes! 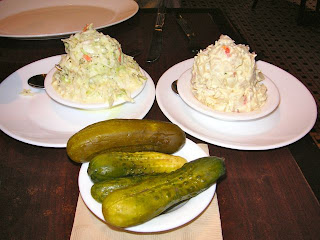 After our meal, I wanted something sweet for dessert. I thought I was "safe" ordering a Chocolate Chip cookie, but, again, another surprise...the order of Chocolate Chip cookies includes two of the biggest cookies I've ever seen. Jim and I managed to eat most of one and took the second one home to California with us. 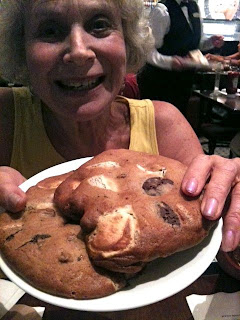 After dinner, we went to see "Love," the Cirque du Soleil show about the Beatles that is playing permanently at the Mirage. The figure in the front is me, trying to be part of the wall outside of the theatre. 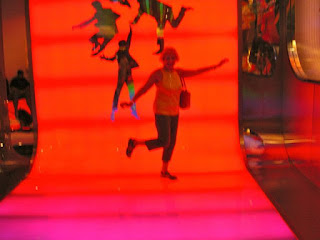 I've seen many Cirque du Soleil performances, both the traveling shows that come to San Francisco every two years and another of the Cirque's permanent shows in Las Vegas. "Love" is the best of the best...fast paced, lively, clever!! I was so hyped up from the energy of the show, it took me a long time to calm down enough to fall asleep that night.

After breakfast at the Bellagio buffet, we spent most of our last morning, wandering around City Center. 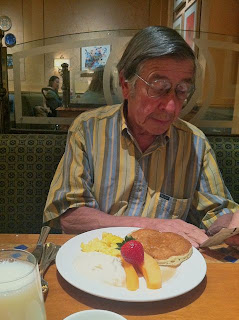 The following photos are the best way to get an impression of what City Center is all about...it's a huge complex of hotels, shops, restaurants. 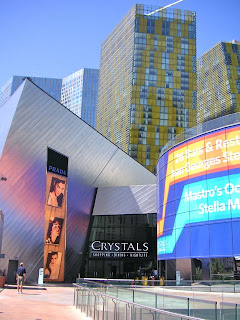 The architecture is confusing and striking. Some of the hotels are the Aria, Vdara, Cosmopolitan, and the Mandarin Oriental. The yellow buildings are the Veer, which are condos to purchase and/or apartments to rent. 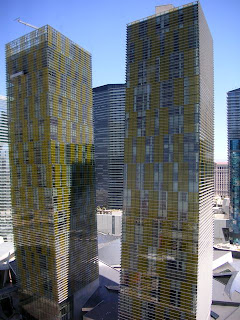 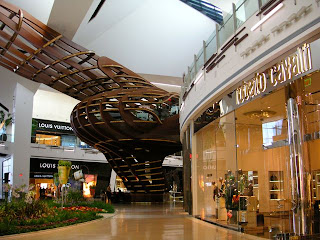 Our favorite hotel in City Center is the Mandarin Oriental. It's lobby is on its 23rd floor and has this fabulous view. 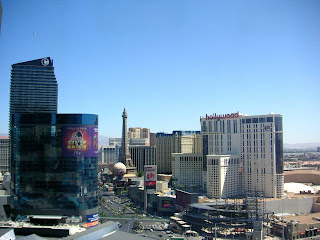 For me, the most interesting part of City Center is the public art by famous artists. 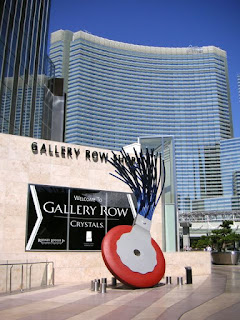 And, one last photo of the Jean Philippe Patisserie in the Bellagio. Colored marshmallows are what cover this train in the middle. 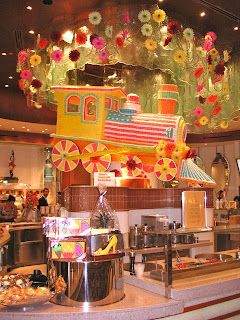 Posted by Where-To-Guide at 4:13 PM No comments: Links to this post