The Bridge Builders: A Photography Exhibit of the Building of the New Bay Bridge East Span 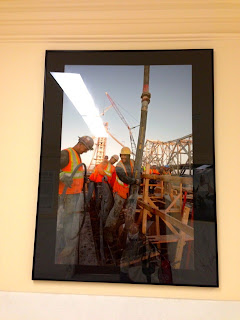 Just a tiny bit of background for those readers who do not live in the San Francisco Bay Area...in 1989, the Bay Area had a large earthquake (Loma Prieta Earthquake) which caused a section of the Bay Bridge to collapse.  The Bay Bridge is the main bridge connecting San Francisco to Oakland and the rest of the East Bay. It has always been a true "workhorse" bridge, carrying huge numbers of drivers every day.

After the Bay Bridge section was repaired, it was decided that the entire Eastern span of the bridge need to be replaced. That was 24 years ago.  The replacement of the bridge has been filled with politics, design debates, and, most very recently, defective bolts used in the new construction.

Finally, the fates be willing, the new Bay Bridge should be operational right after Labor Day.

At any rate, it certainly is about time and I can't wait to drive over it. 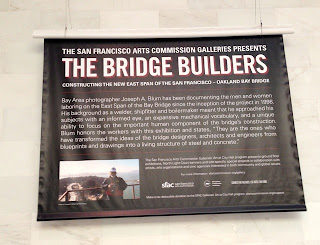 The SECRET was revealed to me last week in a letter published in the San Francisco Chronicle, a letter from a woman from Las Vegas who had been visiting San Francisco with her husband. While touring San Francisco's beautiful City Hall, they happened upon an extensive exhibit by photographer Joseph A. Blum of large color photos he took of workers building the new Bay Bridge span.

The woman noted that there were no listings of the exhibit in the San Francisco Chronicle and that every local she spoke to about it had absolutely no knowledge of the exhibit.

Today, Jim and I went to City Hall to view the exhibit.

It has been hanging since June 24, 2013 and will remain in City Hall until September 27, 2013.  It fills most of the basement level of City Hall and there are a few additional photographs in City Hall's North Light Court on the main floor. There is no fee to view this very extensive exhibit and it can be viewed whenever City Hall is open. 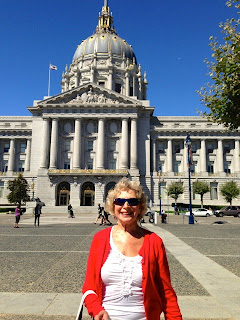 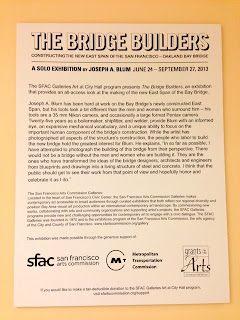 Joseph A. Blum is now a photographer, but, for 25 years, worked in construction as a boilermaker, ship fitter,  and welder.  He knows construction and has been chronicling the bridge construction throughout, telling his story through the eyes of the workers.

His photographs are amazing and thrilling. He's right up there with the workers...and so are you, the viewer.  And, he knows the language of construction, so, by reading his photo captions, you, too, will feel like you are right there working on this magnificent bridge and know what you are doing.

These are a few of his photos included in the exhibit. 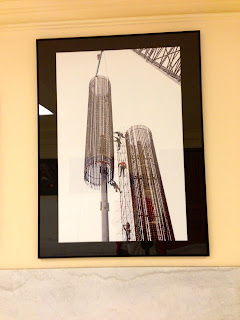 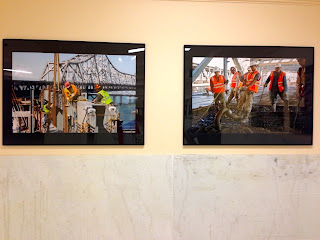 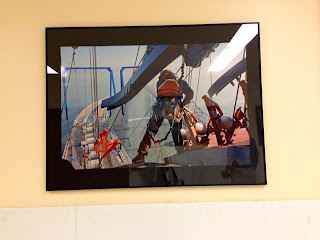 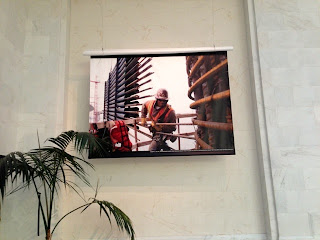 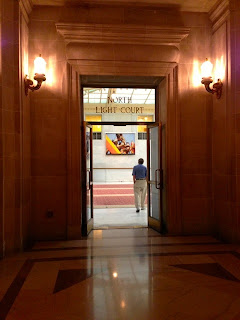 I took us about an hour to look at all the photographs, While the City was packed with people, we met one other person in the exhibit. She, a San Francisco native, had found out about the exhibit as we had, from the letter last week in the San Francisco Chronicle.

Afterwards, we walked around City Hall a bit; it's a magnificent building. 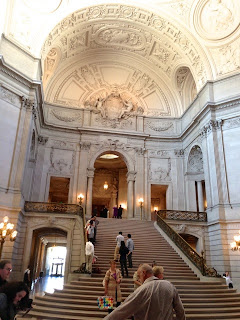 Then, we decided that we had to go to lunch somewhere with a view of the Bay Bridge.

We wound up at the Ferry Plaza Building 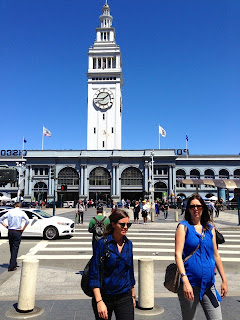 and chose the Ferry Plaza Seafood restaurant for our lunch with a Bay Bridge view. Note, that you can't see the Eastern span of the bridge from the San Francisco side, but we still got our bridge "fix." 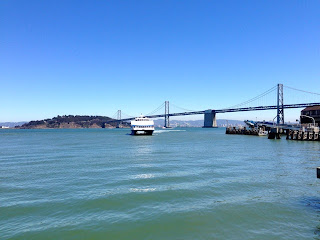 Jim had a cup of New England Clam Chowder (they also serve Manhattan Clam Chowder) and half a Smoked Salmon Sandwich. 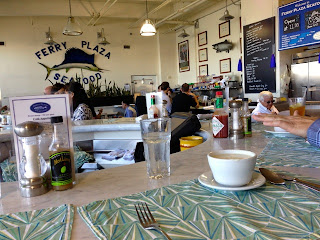 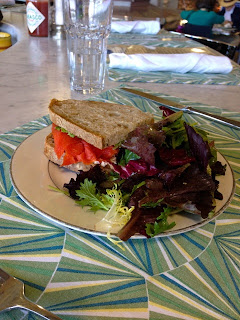 I had a spicy Shrimp Quesadilla. 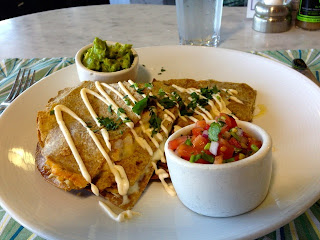 All told, a lovely San Francisco day. And, our next visit to San Francisco...maybe in 6 days...will include a drive over the new Bay Bridge! 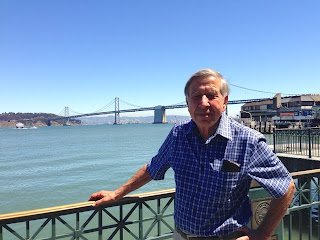 Tasting Wine in the Napa Valley 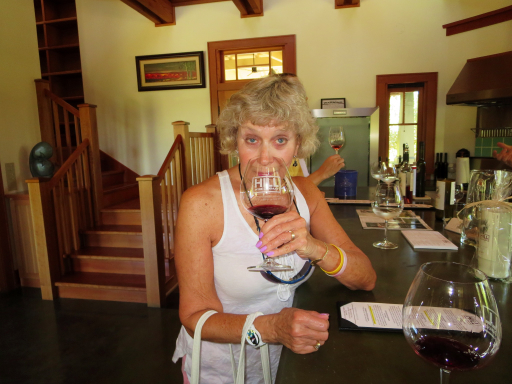 It's August and we are in the middle of our annual week in the Napa Valley.

Even though we live close enough to drive up here for a meal or a day trip, for us, it is the ultimate luxury to stay in the Valley.

We taste wine, we eat good food, we explore, and we relax.

Rather than dashing around to taste at several wineries in one day, we pace ourselves and usually taste at only one winery on any given day.

A trend we've noticed in Napa Valley wine tasting is to taste at tasting rooms. There certainly are an abundance of them right in town in Napa, Yountville, and St. Helena.

It's an easy way to do your tasting without trekking to the many wineries in the area. But, we prefer the experience of visiting the winery and actually seeing where the wine is made and, often, meeting the people who make it.

Of course, there are some wineries that are so remote and/or small that they cannot accommodate visitors on site. Having their wines in a tasting room provides a way to let people sample and buy their wines.

I will also add, in defense of Napa Valley tasting rooms, that most of the tasting rooms here are staffed by knowledgeable people so you will learn about the wines as well as get to taste them.

So far, we've tasted at two wineries both of whose wines were unfamiliar to us. 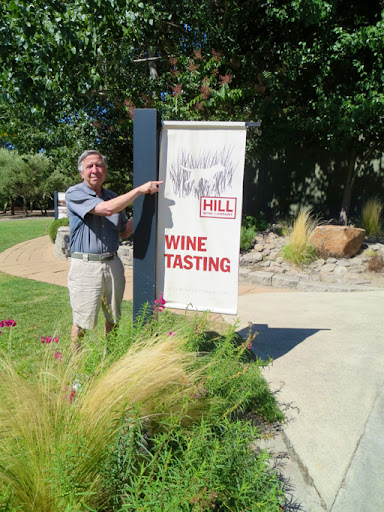 What attracted me to Hill Wine Company in St. Helena, which just opned this year, was an article about it in one of the free publications about the area that are distributed in hotels and other tourist areas.

This family-owned winery features its Black Dog series of wines at the winery. The inspiration in this wine label is proprietor Jeff Hill's black lab who recently passed away. The good dog news for the Hill family is that they have a new black lab puppy who, at this time, makes occasional visits to the winery.

A percentage of each Black Dog bottle sold is donated to the ASCPA. Hill also donates a portion of revenues to environmental causes. 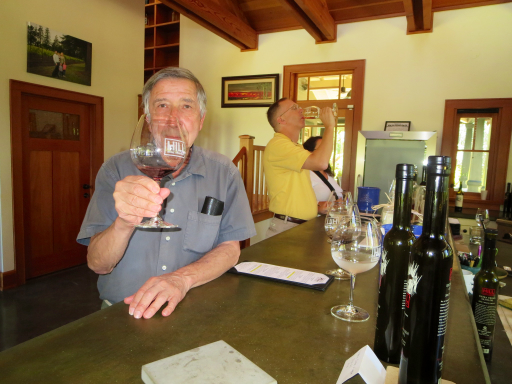 The cost to taste at least 4 wines at Hill Wine Company is $20 per person for the Black Dog series wines, $45 for a reserve and barrel tasting. The tasting fee is usually waived with the purchase of a certain amount of wine.

We also got to taste their excellent olive oil.

We purchased their Merlot and Sauvignon Blanc, both of which we found special.

Reservations to taste are advised. 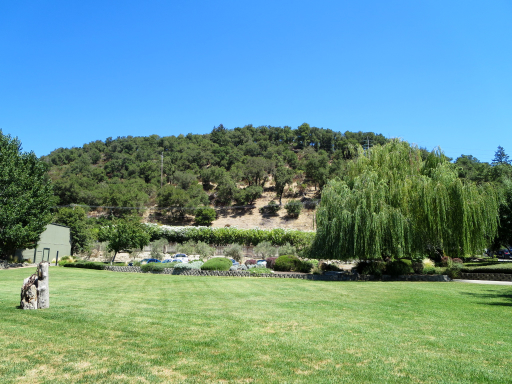 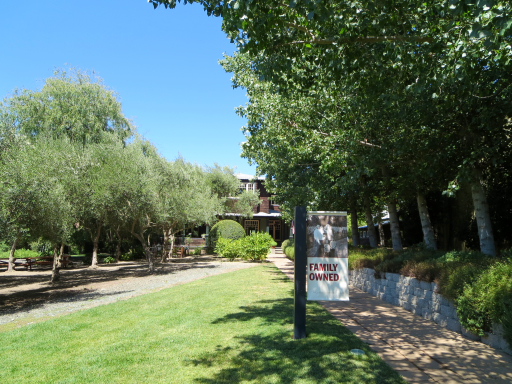 Hill Wine is both picnic and dog- friendly. So bring the pooch, pack a picnic, or even have them cater a picnic for you, and enjoy the day sipping Hill wines. 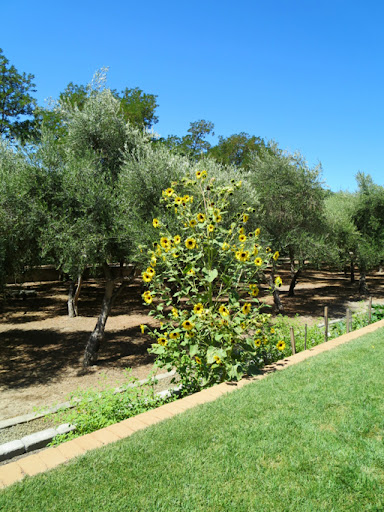 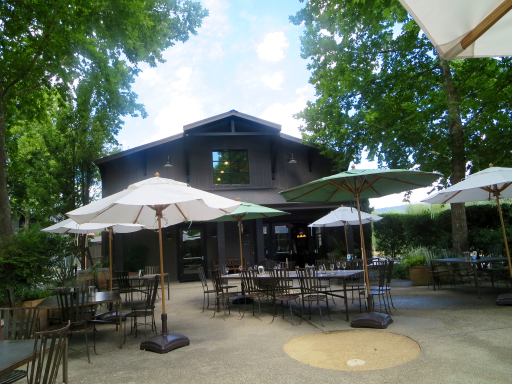 It was our tasting room host at Hill Wine who suggested that we would enjoy tasting at Honig Vineyard & Winery in Rutherford.

Honig was started in 1984. This was our first time to try their wines. 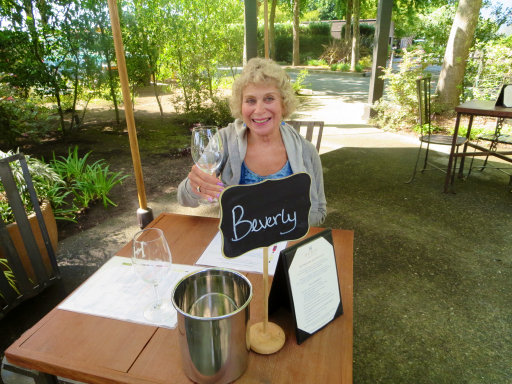 Reservations are required to taste at Honig. Each group has its own table and tasting host. There is seating outdoors on their beautiful patio and also indoors.

The tasting lasts about 45 minutes. the fee is $15 per person and is waived for each $35 purchase. 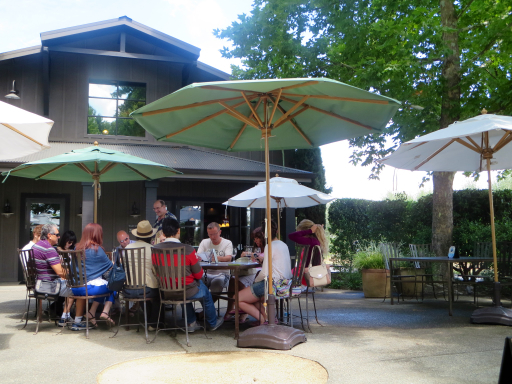 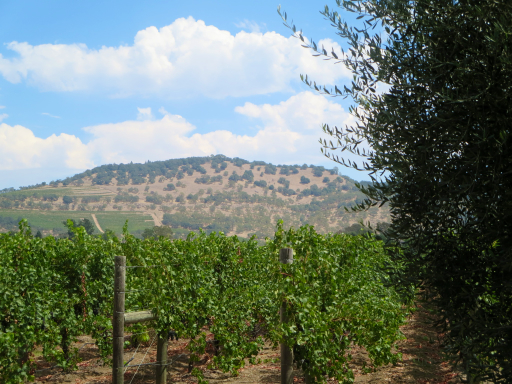 At Honig, we splurged on their 2006 Cabernet and are already planning a special diner with our cooking group, in honor of the wine. We also purchased a Rose of Cabernet that we enjoyed tasting.

Honig has a small area with picnic tables in a corner of their property.

Posted by Where-To-Guide at 6:00 PM No comments: