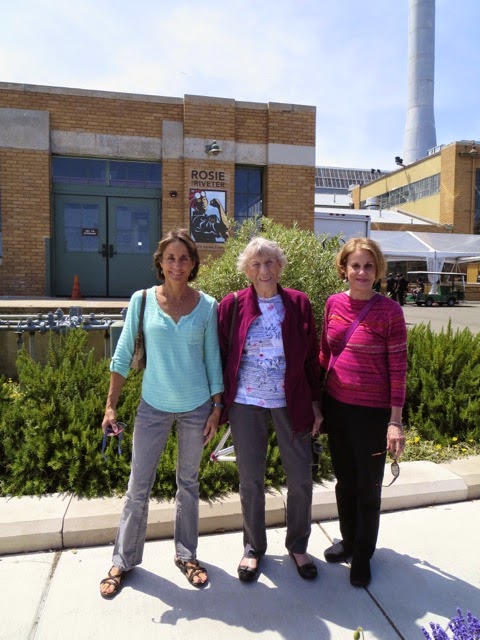 Dixie, who grew up in California, remembers the Rosies when they were building ships at this location during World War II. While she wasn't a Riveter herself, she still has many memories of that time.

Earlier this year, several of the Riveters traveled to Washington D.C. to be honored for their service to the United States. Their visit was the subject of the radio and TV news and the newspapers.  One of the Riveters, Kay Morrison, even gave President Obama quite a kiss!

We planned our visit several months ago.  As it happened, our timing was perfect timing for us to get a preview of the new exhibits in the Visitor Center that are opening this coming weekend (Memorial Day weekend). 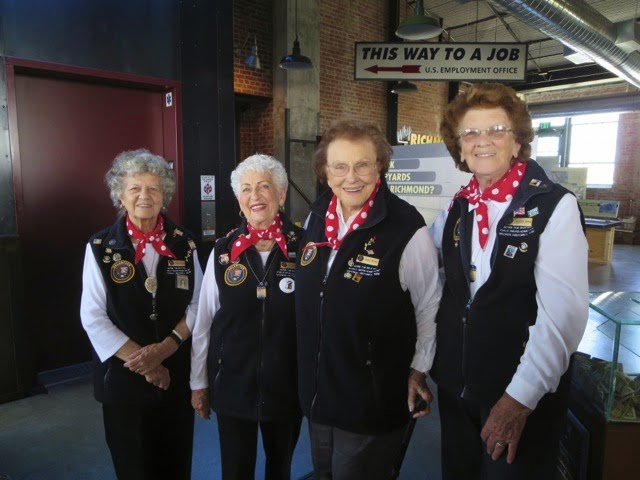 Our first stop was at the Visitor Center where we were greeted by four of the Riveters. They are here every Friday from 10 a.m. until 2 p.m. In the picture above, they are, from left to right, Priscilla Elder, Kay Morrison, Agnes Moore, and Marian Wynn. Kay, proudly, is the one who kissed President Obama and, as she said to me, "He's my president. I can kiss him!"

What delightful and enthusiastic women they are!  They introduced themselves to us and told us what their jobs were during the War and in which building they worked. We got to chat with them several times during our visit, each time learning more about what it was like for them to work building war ships.

The Kaiser shipbuilding plant, which was here, completed a ship nearly every day. The Riveters worked 'round the clock. The record time to construct a ship from start to finish was that for the SS Robert E. Peary which was constructed in less than 5 days; the average time was less than a month.

Dixie recalled that their salaries were very good. At that time, she was earning 50 cents an hour in an office job, while the Riveters earned $1 an hour for their first 40 hours of work during the week. If they worked on Saturdays, they earned time and a half, and, on Sundays, they earned double time. One of the films we watched in the Center's theatre said that the average work week for them was about 60 hours long.

During our visit, there was a press preview of the new exhibit and we got to see it too. There is a riveting station set up where they display their riveting technique. Several videos about life during the war play continuously.

The Visitor Center is open daily. While the Riveters are usually here only on Fridays, volunteers and National Park Rangers are here every day.  Everyone we met was well informed and eager to talk about the World War II years and about Richmond as a Bay Area boom town. 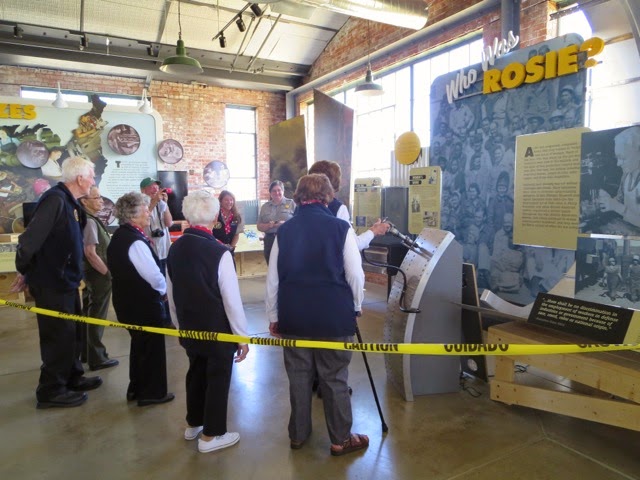 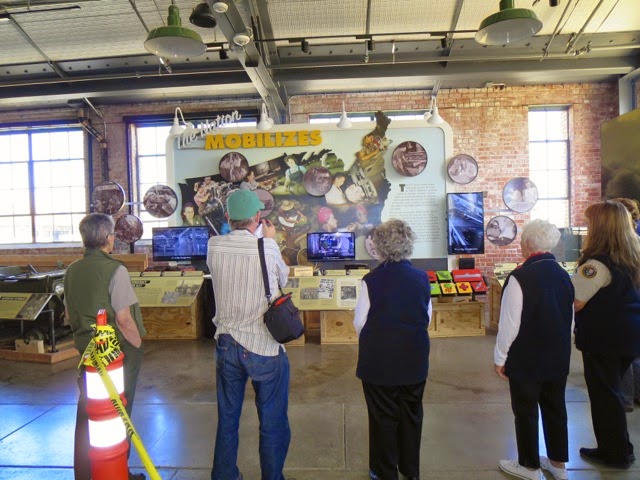 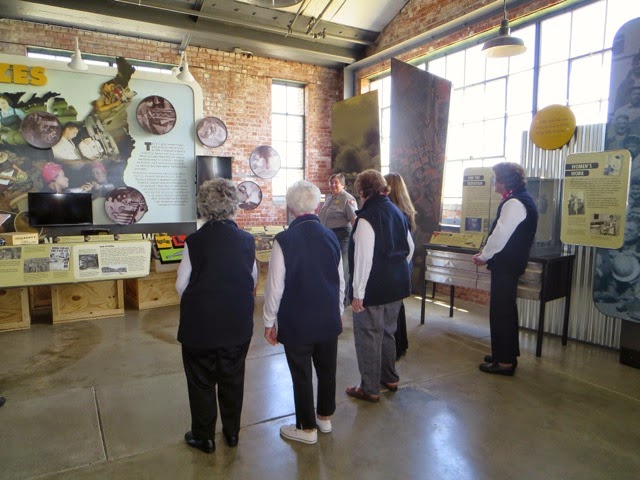 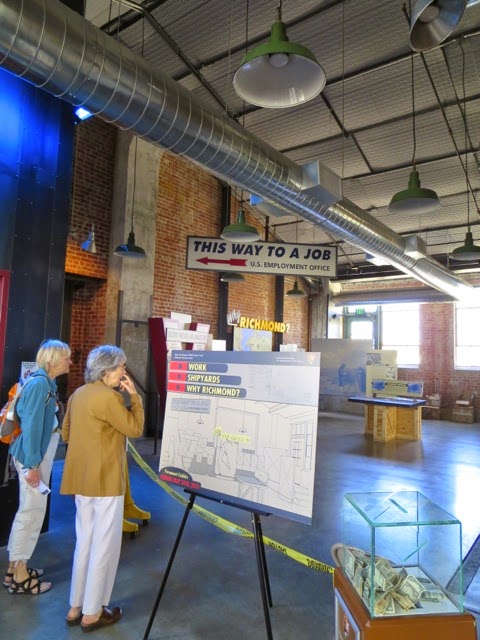 OTHER PARTS OF THE EXHIBIT

We took a break from the Visitor Center for lunch at Assemble, the restaurant in the former Ford Motors Assembly Plant next door to the Visitor Center. During World War II, President Roosevelt banned civilian automobile production. During the war, this Ford Assembly Plant assembled 49,000 jeeps and put the finishing touches on 91,000 tanks, half-tracks, armored cars and other military vehicles destined for the war. 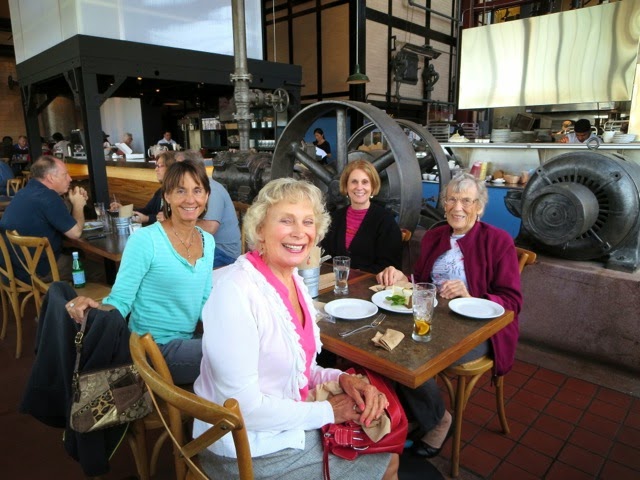 Lunch, too, was a delightful adventure.  The "decor" of the restaurant is that of an automobile assembly plant. Ironically, as if in tribute to the restaurant's delicious and creative menu, there are video screens in the dining room playing reruns of Julia Child television shows. Three noted Bay Area chefs, Richard Massera (César, Chez Panisse), Terumi Shibata-Mazzera (Downtown, Corso) and Maggie Pond (César) have created a menu of "re-tooled American classics."

Assemble is popular at lunchtime. I suggest making a reservation. They serve lunch weekdays, brunch on weekends, and dinner Wednesday through Saturday. 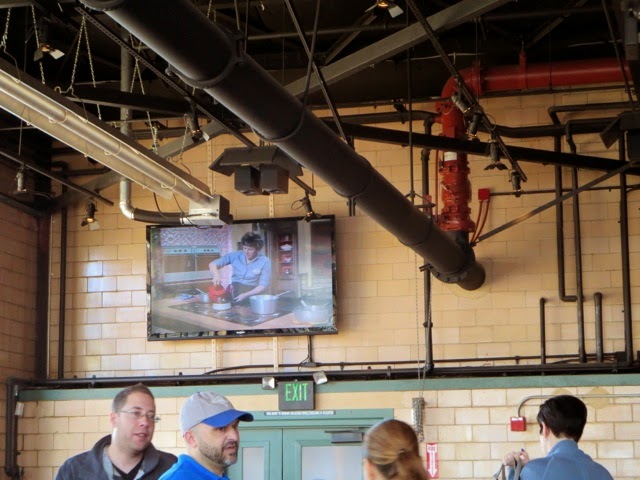 Some of Assemble's food is grown in their on-sight Victory Garden. Many items on the menu are throwback dishes to the war time, but are prepared with fresh, local ingredients. 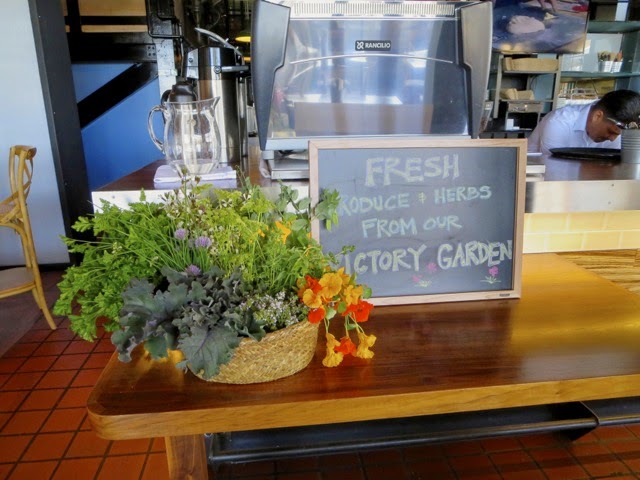 We started our meal by sharing an order of Spiced Boiled Peanuts, described as a "Dixieland Delight" and prepared in a broth with chilies, coriander, and fennel. They were fun to eat and so tasty that Kathy even drank the broth that remained after all the peanuts were gone. 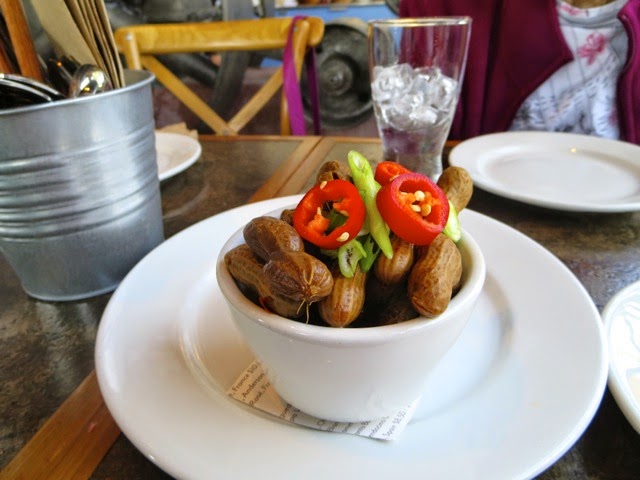 Dixie's lunch choice was the  Grilled Cheese Sandwich, made with swiss, cheddar, and pepper jack cheeses, and a cup of Tomato Soup. 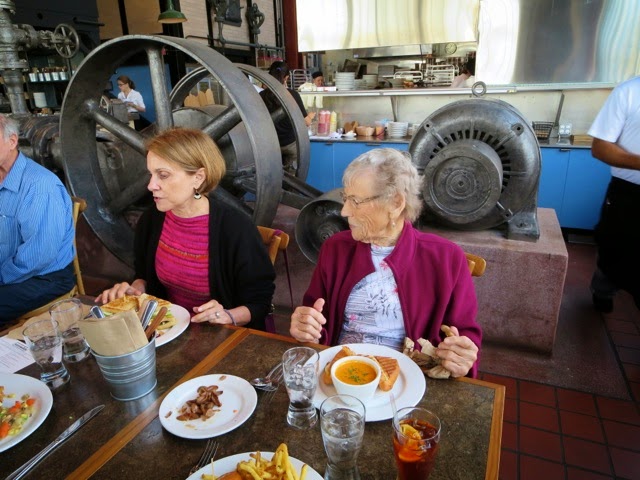 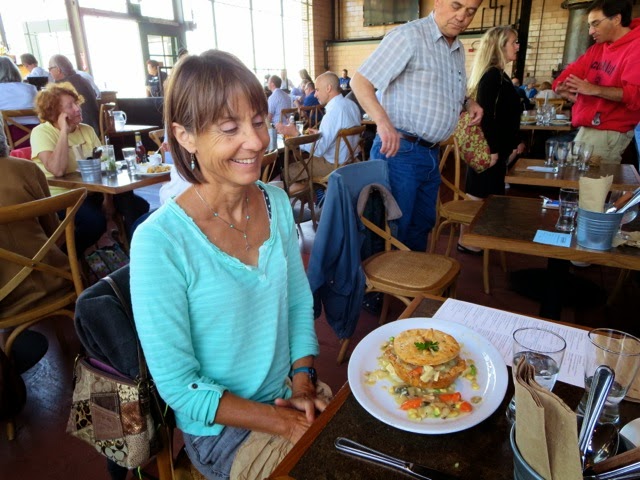 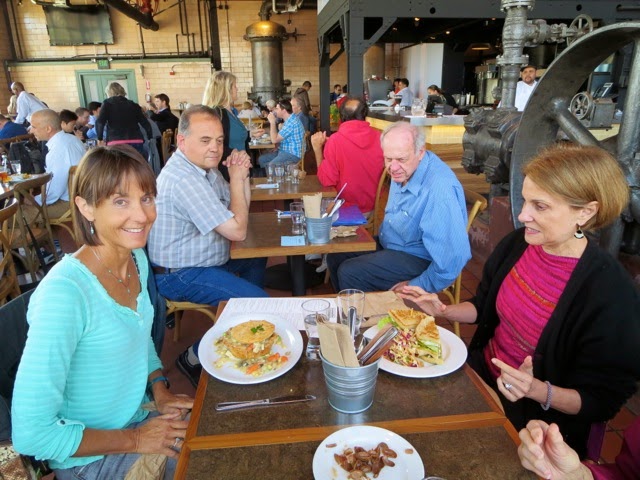 My choice was the Blackened Catfish Sandwich. 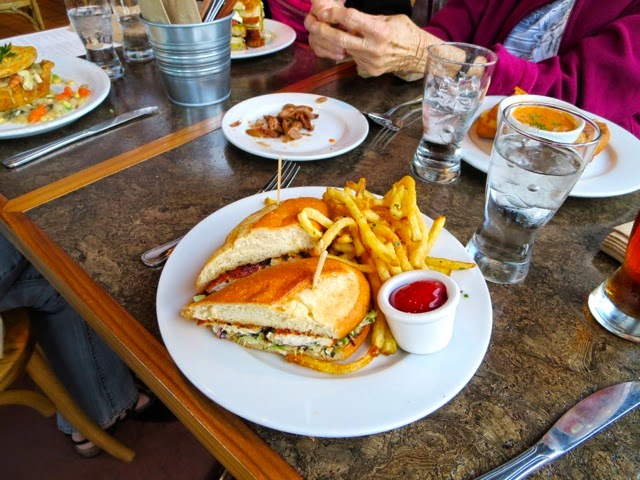 Servings are very generous. And, despite our saying that it was way too much to eat, we ate every last bite.  And, we even shared a slice of Key Lime Pie, Dixie's birthday dessert. 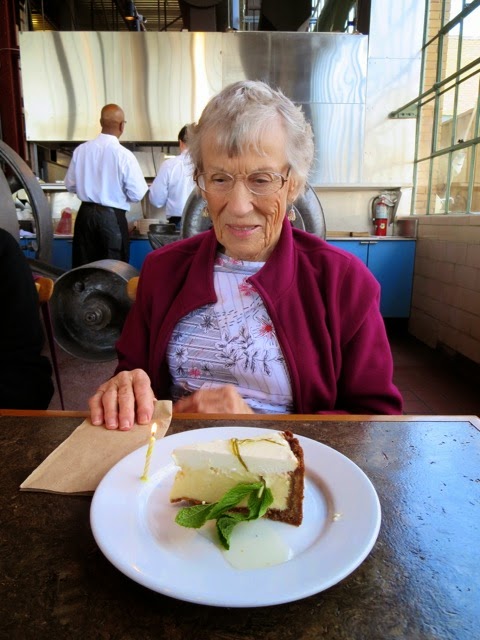 We spent most a day just at the Visitor Center and having lunch at Assemble.

But, there is more to see/visit within the Park.  Of particular interest is the Rosie the Riveter Memorial (open year 'round, dawn to dusk) and the SS Red Oak Victory ship.  The Red Oak is in the process of being renovated by volunteers and can be boarded for visits on Weekends, Tuesdays, and Thursdays from 10 a.m. to 3 p.m.).  To get to either or both of these attractions, you will need to drive from the Visitor Center.  There are maps, information, and a printed Self-Guided Auto Tour in the Visitor Center. 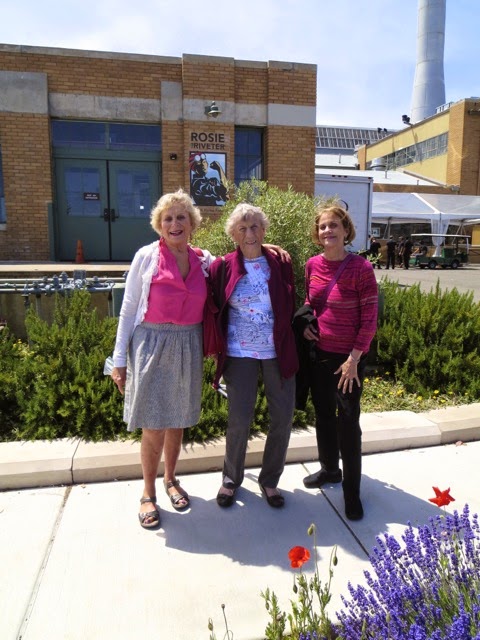 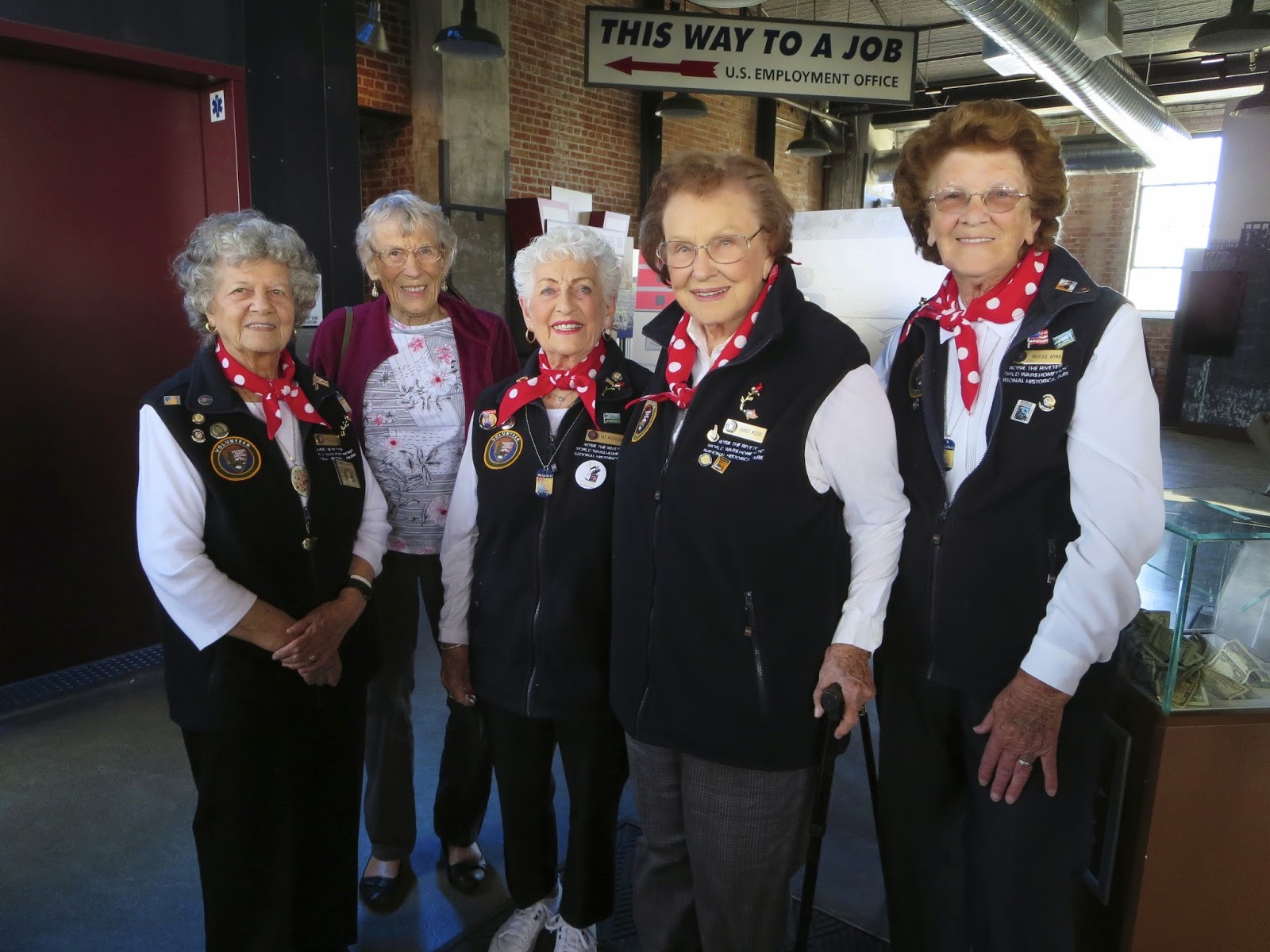 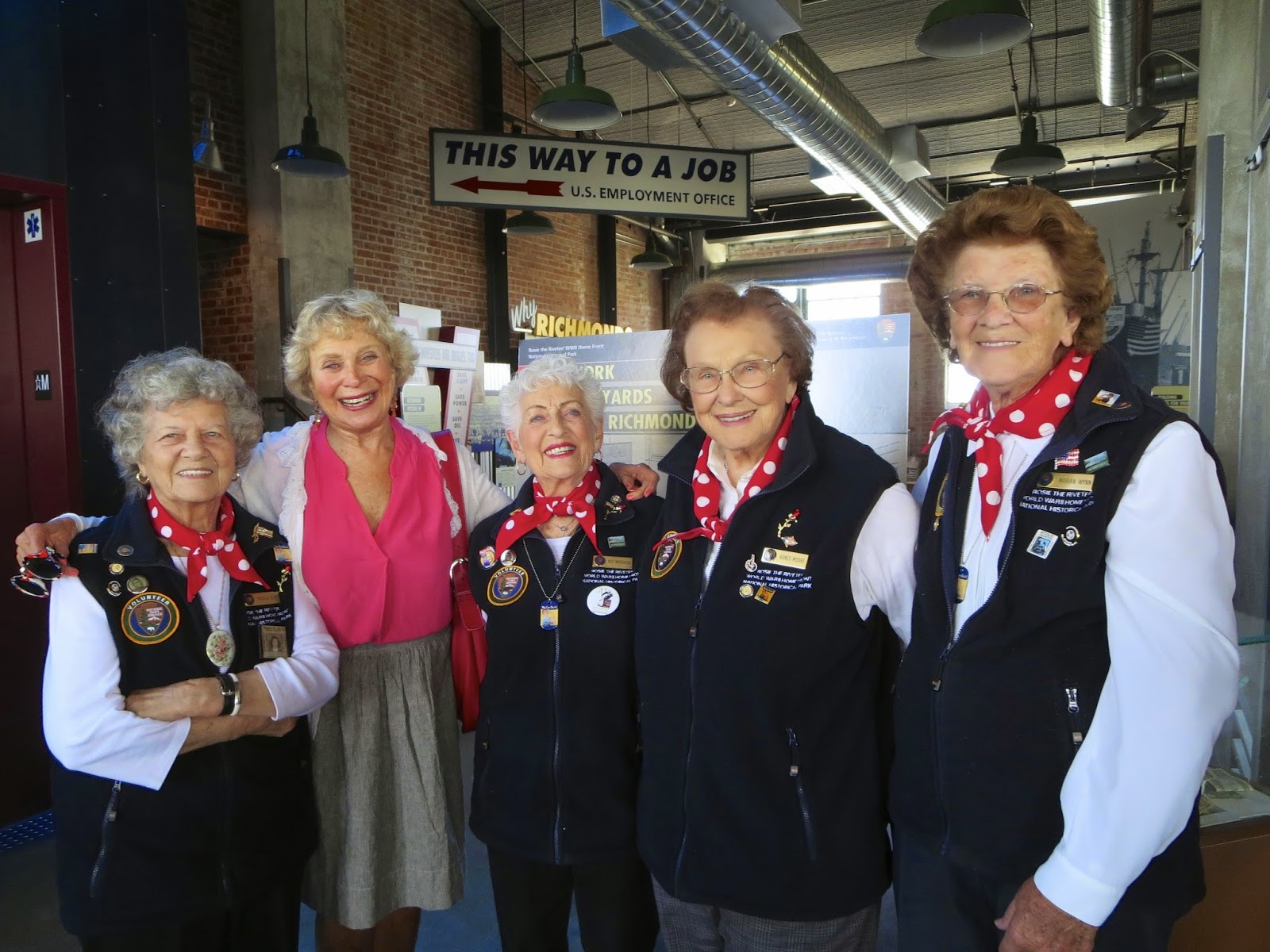 Posted by Where-To-Guide at 8:15 PM No comments: Links to this post