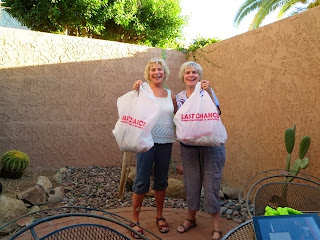 I've just spent four days in the Phoenix/Scottsdale area visiting with friends, eating in wonderful restaurants, and doing a bit of shopping and touring. I spent an entire day at the Musical Instrument Museum, a unique, educational, and delightful museum.

I traveled on Halloween and, as always, the Southwest Airlines gates in Oakland were wildly decorated. At 5 a.m., this is what greeted me as I descended, blurry-eyed, to my gate. It certainly jolted me awake. 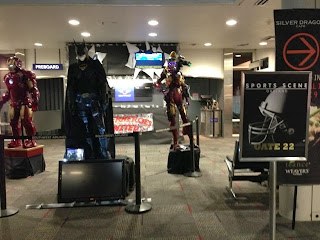 I've spent many a Halloween with Lois and Jim in Phoenix and it has become something of a tradition for us.

Lois and I started our visit with a pilgrimage to Last Chance, the legendary Nordstrom discount store for it's returned, overstocked, and sometimes damaged items. After a solid three hours of foraging through Last Chance (see the "fruits" of our shopping at the beginning of this blog), we were famished.

We chose Pizzeria Bianco in the nearby Town and Country shopping center for our lunch. This location is the newest of James Beard Award-winning Chef Chris Bianco's Phoenix restaurants. Chef Bianco got his start in 1988, in the back corner of a neighborhood grocery store. He is known for being a driving force in the slow food and artisinal pizza fronts.  I've just recently heard of the Bianco restaurants and Lois knew of them, but has stayed away because of waits of as long at two hours at his restaurants.  For our late lunch on a Thursday afternoon, there was no wait; we were seated immediately. 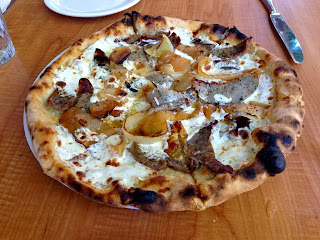 Our choice was the "Wiseguy" pizza, made with Wood-Roasted Onion, Smoked Mozzarella, Fennel, and Sausage.  I liked the combination of toppings and the thin, crispy crust. Lois, had assumed that the pizza would have tomato sauce on it and was a bit disappointed.  Our consensus on Pizzeria Bianco is that we enjoyed and appreciated the fresh and creative combination of ingredients and the friendly service, but, if we had had to wait two hours to get a table, we would have gone to another of the many excellent pizzerias in the area.

That night for dinner, we headed to Downtown Scottsdale to Barrio Queen, another restaurant whose chef has a large following. Chef Silvana Salcido Esparza's popularity came from her several Scottsdale cafés. Barrio Queen is the first of her full-service restaurants. Her authentic Mexican dishes are made with unique combinations of market-fresh ingredients. 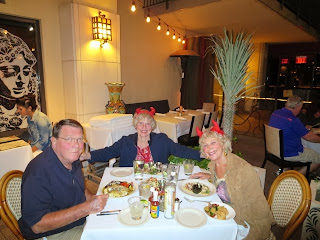 On Halloween night, the restaurant was packed.

The extensive menu features a large selection of tacos and small plates, Chef Silvana's versions of Mexican "Street Food,"  as well as a tempting variety of entrees.

Jim chose the Enchiladas Suizas, Chef Silvano's take on a traditional dish..the chicken was rubbed with spices and the toppings included a spicy serrano tomatillo sauce.

I had the Cochinita Pibil, one of Chef Silvano's signature dishes. It is pork, marinated in sour orange and achiote paste, wrapped in a banana leaf and slow cooked all night long. This dish is topped with pickled onions and pico de gallo. It is served with chipotle mashed potatoes and calacacitas (squash, corn, and peppers).

We were all happy with our meals and Lois and Jim think Barrio Queen's Margaritas, which we all drank, are the best anywhere. Prices are very reasonable with about all entrées priced under $20. The tacos are $3.50 each or 3 for $10.

Other dining adventures included a lunch with Hallie, my cooking teacher from Provence. Hallie suggested Phoenix City Grille as a good place to linger and visit, while enjoying tasty food. 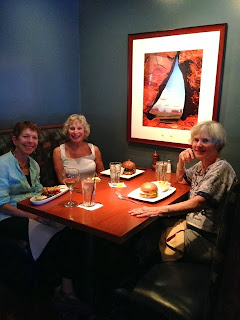 Hallie had the Grilled Salmon Skewer. Lois and I had Sandwiches; Crispy Eggplant for me and the Spiced Chicken Breast for Lois.

We met friends Marcia and Charlie for Sunday brunch at Timo, another of Hallie's recommendations. None of us was familiar with Timo, but we all agree that it is so good and so pleasant, we can't wait to return. The restaurant has a beautiful outdoor patio as well as an indoor dining room. We ate indoors but felt like we were outdoors on this warm Sunday because the garage door front windows were rolled up and we had full exposure to the outdoors.  I suspect that Timo's building was once a gas station. 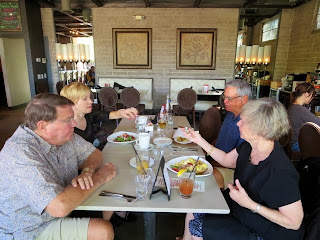 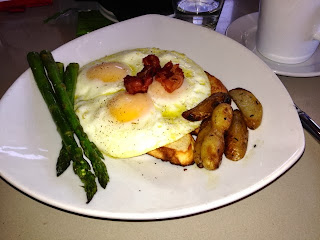 Several of us had the 3 Eggs on Toast. Other choices included the Crab Cake Benedict and a Green Salad with fresh berries, pecans, pancetta, and feta cheese.

*********
Our day at the Musical Instrument Museum (MIM) was memorable. The MIM is the world's only global musical instrument museum.  Other such museums, including those in France and Belgium, only include musical instruments of their countries.

The MIM was founded by Robert J. Ulrich, former CEO of Target Corporation, a collector of African art and museum enthusiast. He was inspired to create the Phoenix MIM after a visit to the Musical Instruments Museum in Brussels, Belgium.

Having been to some of the European musical instruments museums, I can say that the experience of this MIM far exceeds anything I've experienced. Being a new museum, it takes advantage of the latest technology and combines displays of instruments from about 200 countries with wireless audio that streams music and sounds of instruments along with videos of the instruments being played in their context in their countries.

The museum is so extensive that, in a full day, Lois and I were only able to cover the Africa and Middle East and Asia and Oceania galleries. We never got to the Europe, Latin America, or United States/Canada galleries. We also didn't have time for the Mechanical Music Gallery.

These photos are from the galleries we visited. 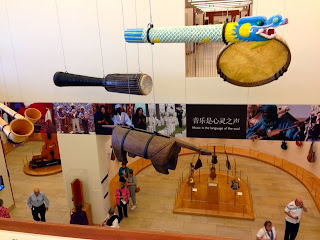 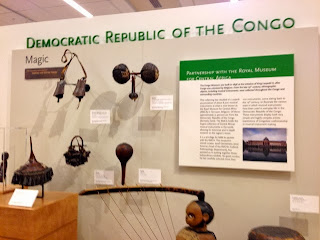 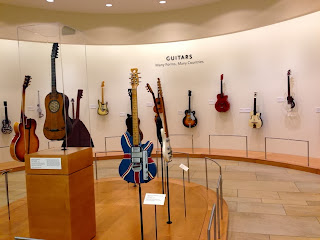 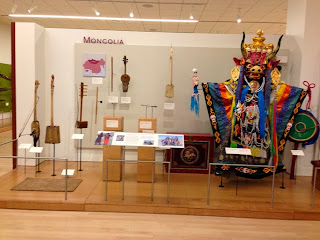 After a lovely lunch in their restaurant, Café Allegro, whose menu features local ingredients in creative preparations, 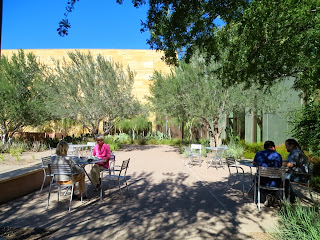 we spent the rest of the afternoon at the Special Exhibition, "Women Who Rock," an exhibit created by the Rock and Roll Hall of Fame and Museum in Cleveland, Ohio. 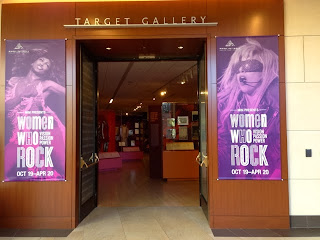 It includes the costumes, instruments, and artifacts of more than 70 women from the Foremothers of Rock, such as Bessie Smith, Billie Holiday, and Ma Rainey, up to the rockers of the New Millennium, including Alicia Keys, Lady Gaga, Taylor Swift, and Janelle Monae.

"Women Who Rock" will be at the MIM through April 20, 2014. Here are some highlights of the original outfits of some of the women. What I can't include here is the sound track that fills the gallery with music by the artists featured. 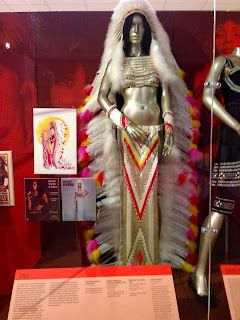 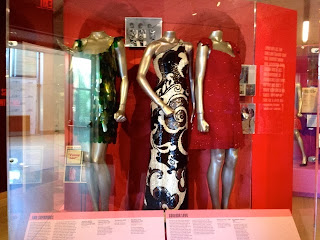 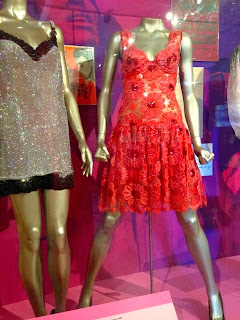 Admission to the MIM is $18 for all over age 19. "Women Who Rock" costs an extra $7 with museum admission and $10 for this exhibit only. The price is definitely worth the experience; just allow a day for your visit.
*********

A final note on Sky Harbor Airport: The Southwest Terminal, Terminal 4, is the nicest airport terminal that I've been in, and it gets more interesting each time I am here.

It's central pre-security screening area has restaurants, shops, and art exhibits that are local to the area. I usually buy my dinner at the Paradise Bakery in this area, but lately have noticed that at the post-security gates in Terminal 4, there are even more tempting restaurants. My favorites at Gate D, include La Grande Orange and Barrio Café (the Barrio Queen restaurant group). Humble Pie, Pei Wei, and Olive & Ivy are just some of the local restaurants at Gate A. Look for La Madeleine, Focaccia Florentina, El Bravo, and Cowboy Ciao at Gate B. And, there's a second Paradise Bakery at Gate C.

Posted by Where-To-Guide at 4:38 PM No comments: Links to this post