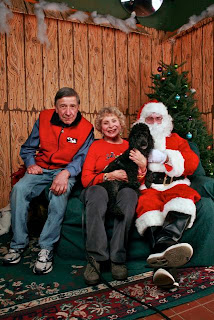 Well, Christmas is over! I'm just back from my day-after shopping and am actually considering putting away my gift wrap and writing some thank you notes.

It's been a lovely December of celebrating and I still have a few more celebrations this week, but, I thought I'd take the time to send my good wishes for happy celebrations with family and friends and good cheer as we approach the end of 2010.

This year's Holiday Season started in early December with the first night of Chanukah on December 1. Here's my menorah, brightly lit on the last (8th) night of the Festival of Lights, as Chanukah is called. Since the Jewish calendar is a lunar calendar, Chanukah occurs at a different time on our Julian (or Gregorian) calendar each year. In 2011, it starts on December 20 (mark your calendars!). 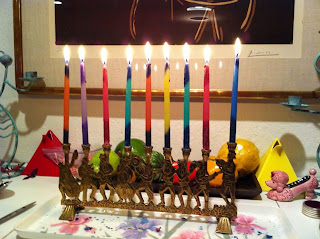 Union Square in San Francisco is always beautiful in December. 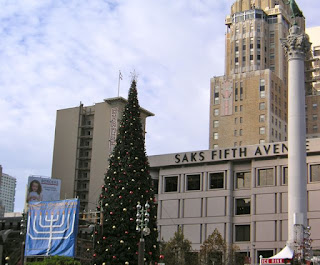 Here's the skating rink and the Christmas tree and Chanukah menorah. 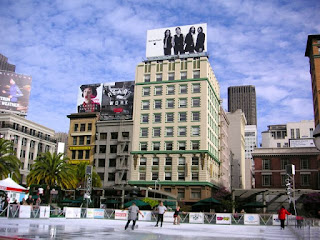 Neiman Marcus's enormous Christmas tree rises up under its historic dome. The glass dome, depicting a sailing ship, was saved and restored from the City of Paris store that occupied this site until 1981. 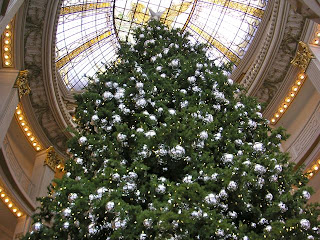 The day I was shopping at Neiman Marcus, I treated myself to their famous Pecan Tuna Salad, in a sandwich, at their informal café, the Fresh Market Café. 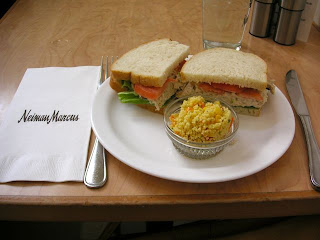 And, the Garden Court restaurant at the Palace Hotel was particularly festive, with two enormous Nutcrackers guarding the entrance. 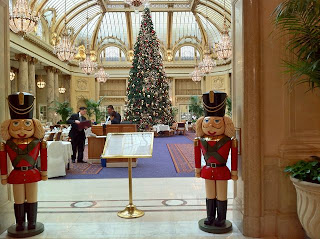 Macy's on Union Square always dedicates several of its windows to SPCA pet adoptions during the Holiday season. There will be pets for adoption from Macy's windows through January 2; it's not too late to give a pet a home. 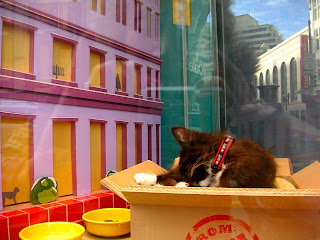 Because we celebrate all holidays that involve food and gifts, we were up early Christmas morning (it was still dark outside) opening gifts while we ate breakfast in the living room. 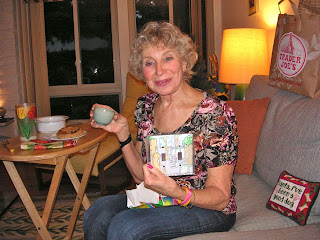 Louie was on high alert for food both dropped or snatched. He managed to steal part of my cinnamon roll and dunk an ear in my oatmeal! 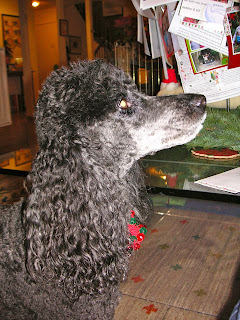 My most fun gift from Jim was this switch plate which was quickly installed in our kitchen by the door that leads out to my garden. I've been studying Horticulture at our local community college and Jim googled "horticulture gifts" and came up with this very amusing (and practical) gift. 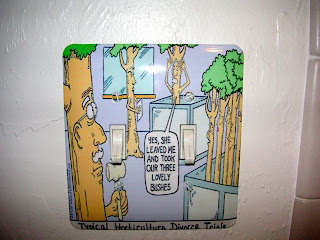 In the afternoon, friends Barbara, Mary Ann, and Michael joined us for Christmas dinner. 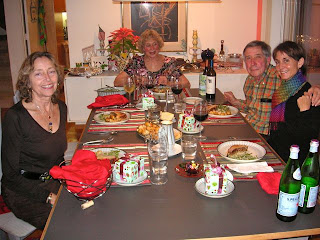 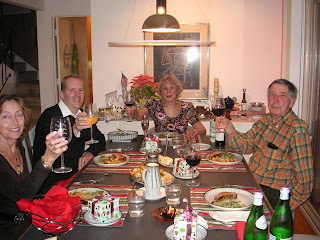 Louie's friend Elle, the daschund was here too. 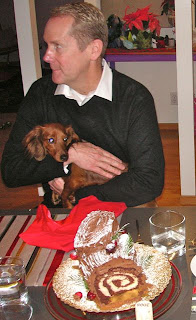 This year, my menu was a Rack of Pork, 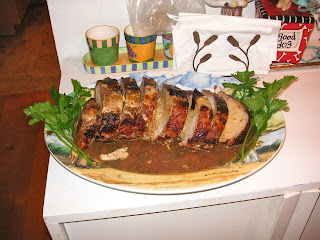 Green Beans with Shallots and a Mustard Cream Sauce and a mixture of Roasted Turnips, Cauliflower, and Potatoes (white veggies for a white Christmas). 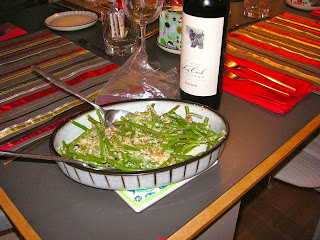 Barbara and Michael kept us in wine: Prosecco with hors d'ouevres and both red and white with dinner. 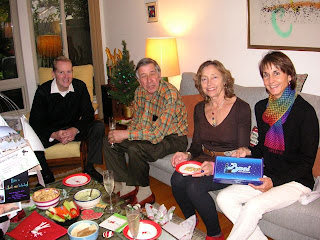 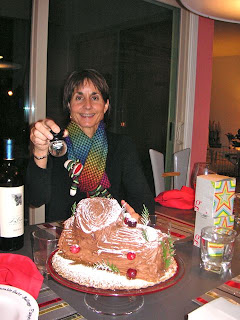 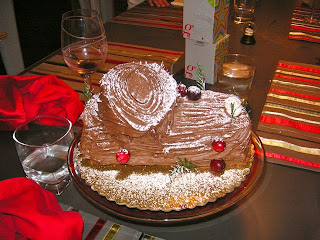 Of course, the wonderful meal would not have been such a success without the assistance of my "sous-chefs." 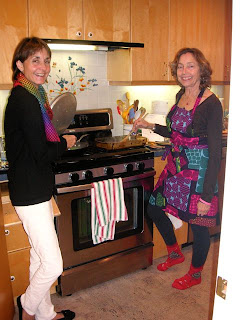 We had table gifts for everyone too. Louie gave everyone a tiny snow globe with a black poodle in it. Jim's table gift, presented with dessert, was socks for left and right feet (one each) because, as the package says, "We don't have two left feet." Notice that Mary Ann decided to "steal" the gift that Louie gave to Elle, a dog toy sock puppet, and wear it in her scarf. She did give it up before Elle went home. 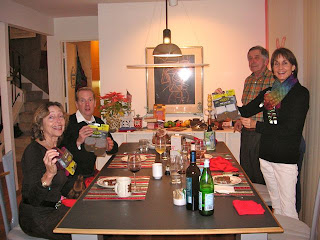 Thank you all for visiting my blog through the many years that I've been writing it. I enjoy hearing from you and wish you all the best in 2011!
Posted by Where-To-Guide at 2:05 PM 2 comments: Links to this post 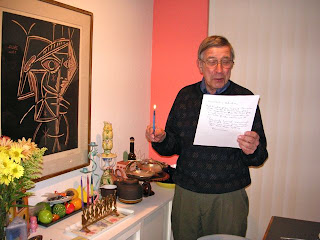 Yesterday, December 3, was the two-year anniversary of Ted's murder. Finally, this fall, the murderer was sentenced to spending pretty much the rest of his life in jail. We, his friends, are relieved that this man will never be walking the streets for over 30 years.

All very tragic, but, Ted's death has nurtured the friendship between Ray, Mary Ann, Liz, Jim, and me. We all have connections to Ted and we celebrate this.

Last night, we had our second remembrance dinner together at our house.

Since it was the third night of Chanukah, we recruited Jim to light the candles and tell the story of Chanukah. 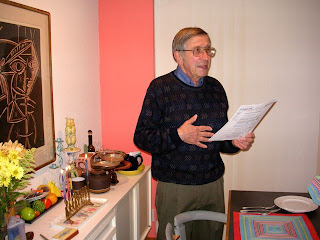 Ray and Mary Ann recorded Jim's presentation on their iPhones!!! 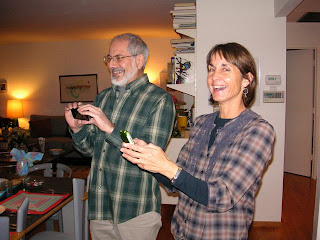 While I did serve an entire meal...starting with Sushi and Duck Mousse, going on to Zinfandel Spaghetti with Broccolini and a seasonal salad, I neglected to take pictures until dessert. So here is a picture of one of our desserts: A super-large Chocolate Cupcake with Peppermint Bark on the frosting...it came from Trader Joe's and can serve 12...very decadent and very very delicious. We also enjoyed Raspberry Herbal Tea with a special cheese, made with the same Raspberry tea, from a dairy farm in New York State. 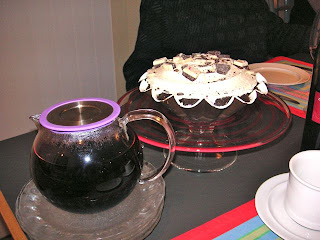 And, despite eating and drinking quite a bit, Liz and Ray could not resist doing a cookie sampling of Louie's vegetarian dog cookies!! 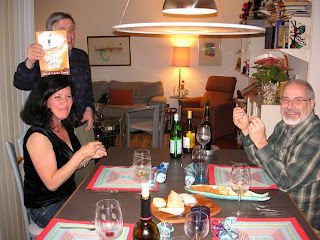 We will never forget you Ted and how you enriched our lives. And, you would have enjoyed this evening.
Posted by Where-To-Guide at 1:43 PM 2 comments: Links to this post