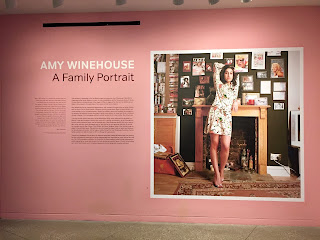 After recently seeing the new documentary about Amy Winehouse, "Amy," I've been trying to learn more about Winehouse and her short life (suicide at age 27 in 2011) and her extraordinary career.

The Contemporary Jewish Museum in San Francisco is currently featuring (through November 1, 2015) "Amy Winehouse: A Family Portrait," a very personal exhibit of her belongings and about her family.  Winehouse's family donated the items to the Jewish Museum London. Although the exhibit occupies just one large gallery, Barbara and I left it feeling like we'd stepped into Amy Winehouse's family and life.

Barbara and I talked more about Amy Winehouse over lunch at Wise Sons Jewish Delicatessen, probably the best Jewish deli in San Francisco and maybe the Bay Area.  The museum's Wise Sons is a branch of the main deli in San Francisco's Mission District. The menu is less extensive than at the main deli, but very much worth a visit for their made-in-house corned beef, pastrami, rye bread, bialy, rugulah, and more. 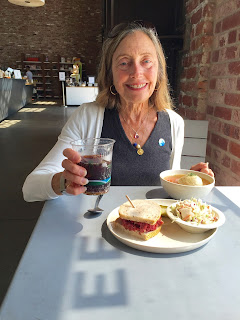 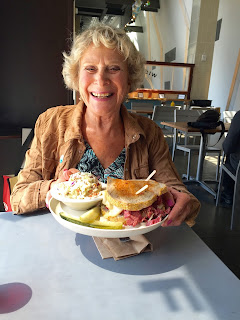 A Note of the Contemporary Jewish Museum:  It is located downtown San Francisco on Mission Street, between Third and Fourth. It's entrance facade is a restored facade of the 1907 Pacific Gas & Electric (PG&E) Power Substation (designed by architect Willis Polk) that previously occupied this site. The interior of the museum, and the rest of its exterior,...note the "box" structure to the left of the facade...is ultra-modern, designed by architect Daniel Libeskind.

The Museum features an ever-changing variety of exhibits.  With Hardly Strictly Bluegrass just over, I enjoyed the ongoing "Hardly Strictly Warren Hellman" exhibit  which celebrates Warren Hellman, one of San Francisco's greatest benefactors and founder of this annual Bluegrass festival which is held in Golden Gate Park. 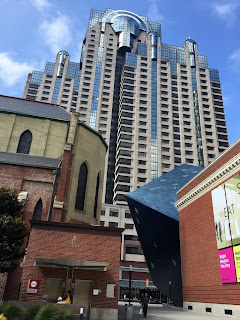 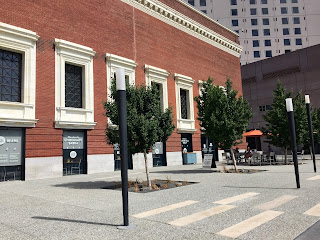 Posted by Where-To-Guide at 4:18 PM No comments: