Lobster for the Price of Turkey 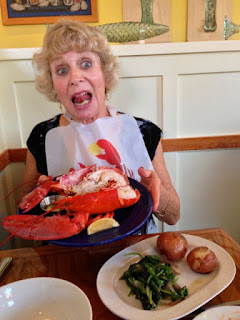 Three years ago, Jim and I started a new Thanksgiving tradition: Lobster for the Price of Turkey.

Actually, it was Yankee Pier, a New England-style seafood restaurant in Lafayette, California, that started it for us. 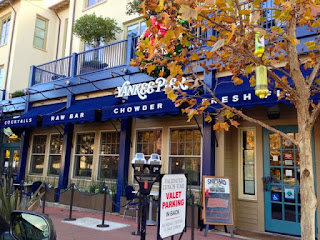 For many a year, I've been cooking our Thanksgiving dinner. We like to stay close to home and just celebrate by ourselves, with, of course, Poodle Louie.

But three years ago, we were a bit undecided on what we would do on Thanksgiving. And, when I got the email from Yankee Pier offering Lobster for the Price of Turkey, it was decided...the deal was/is that the restaurant serves a three-course meal on Thanksgiving, with limited choices for each course. Whether you choose Turkey or Maine Lobster or one of the other main courses, the price is the same. This year, the price was $45 per person. 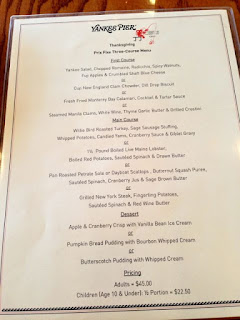 As a former New Englander, I consider any meal that involves Lobster to be a perfect meal.  I imagine the Pilgrims ate a lot of lobster while they were camping in Plymouth...lobster is part of my heritage!!!

And, this year, Yankee Pier's menu was expanded to offer more choices. The main course choices included, in addition to Turkey and Lobster, Steak, Pan-Roasted Petrale Sole, and Scallops.

For First Courses, we chose Fried Calamari and the Yankee Salad, a salad of lettuce, walnuts, apples, and blue cheese. We shared both First Courses. 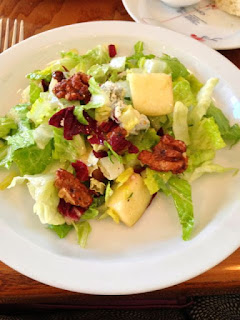 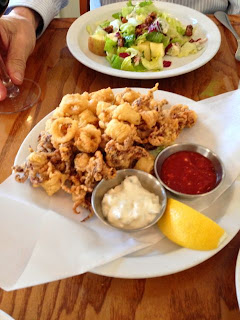 I, of course had the Lobster, which was wonderful...and fun to play with too...somehow, my lobster seemed to have lost one of his eyes in the process of arriving on my plate, but that did not stop me from menacing Jim with his head from across the table. 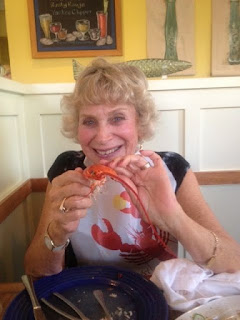 Jim had the Sole and was happy with his choice, too. 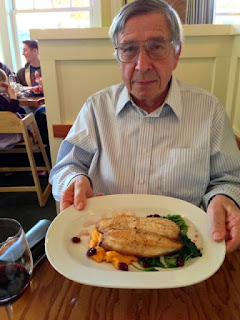 We both ordered the Cranberry Apple Crisp with Ice Cream for dessert. 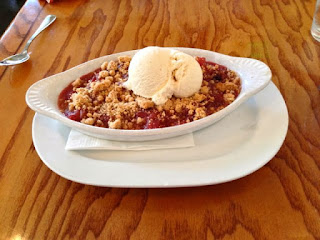 I only ate my ice cream at dinner and took the Crisp home for another day...one serving would have been enough for both of us, 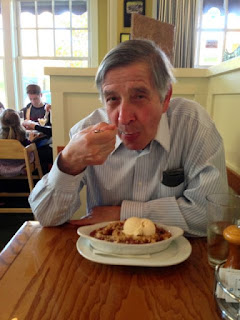 but Jim managed to eat his entire serving on his own.

I'm thankful for a beautiful day, good friends, family, and a lovely Thanksgiving Day. Hope you've had a good one too. 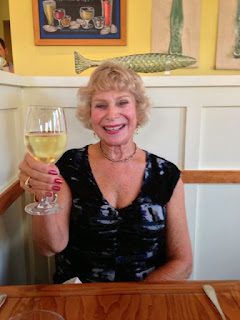 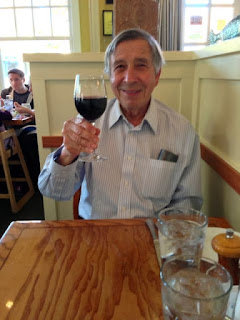 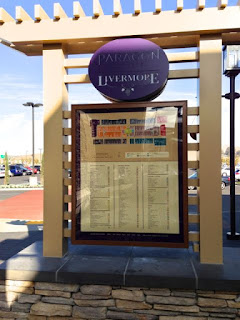 A week ago, a new outlet mall, Paragon Outlets, opened in Livermore, CA, about half an hour's drive from my house.

I would have been there on opening day had I not had other commitments. Maybe it was a good thing that I didn't get there last week as there were huge traffic jams all the way out onto Highway 580 which goes right past the Outlets. And, despite the huge parking lots all around the mall, the lots were entirely filled to the point that some shoppers had to park on the other side of the highway.

This past Thursday was the first day I could get there.

Before I even left the house, I knew I was going to have a good day of shopping.... My horoscope in the newspaper said, "You'll find bargains if you go shopping. Picking up little things for friends or colleagues will be a nice way to show your appreciation..."  Now, was that a coincidence, or just my astrology staying in tune with me?

My strategy was to get to the mall when it opened at 10 a.m. There were traffic monitors out there directing traffic into the mall.

I found parking near the stores I wanted to visit first 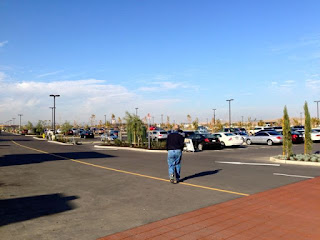 and had a few minutes to get a feel for the mall's layout. It's laid out in a rectangle, with two parallel walkways of shops on each side of the mall.  The shops line the center and the outer edges. 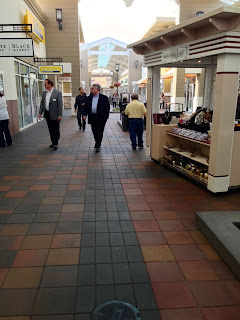 Its Starbucks is the biggest Starbucks I've ever been in. It opens at 6 a.m., so that shoppers who arrive early, and, of course, the people who work here, have a place to get coffee and a bite to eat before the stores open.

The Paragon Outlets in Livermore is relatively small, compared to many outlet malls that stretch so far and wide that it is impossible to even walk past all their shops in a single day of shopping, never mind shop in them. Not so at this mall; I could easily navigate it, sometimes doubling back to revisit shops, in the 5 hours or so that I spent there. I was able to visit every shop that appealed to me.

There are an abundance of restrooms, conveniently located throughout the mall. And, there are plenty of places to sit down throughout.

I think this outlet mall has the biggest concentration of upscale shops of any I've been to. 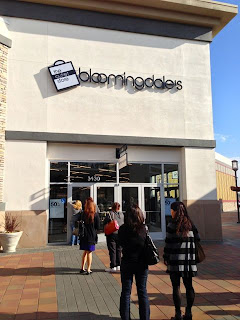 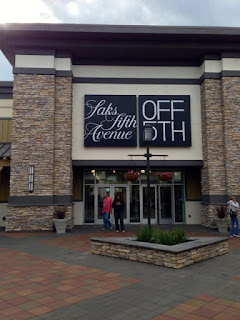 One end is anchored by Off Fifth (Saks Fifth Avenue) and Bloomingdale's outlets. The anchor at the other end is Last Call (Neiman Marcus).  These outlets were main attractions to me and I found lots of current-season clothing and accessories at very good prices. The Bloomingdale's outlet is one of a very few in this country; this was my first time at one and its mix of merchandise was my favorite of all the anchor outlet stores here.

CAbi, a line of women's clothing that is sold exclusively at home parties, has an outlet here. 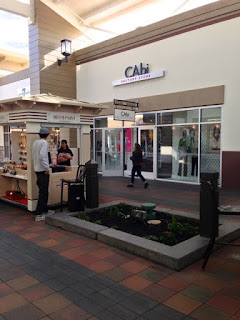 I'm something of a CAbi fan and was thrilled to find a top that I love, priced at more than half its original price.

Some of the other upper-end outlets include Armani, Prada, Burberry, Barney's New York, St. John, Tumi, and Kate Spade. 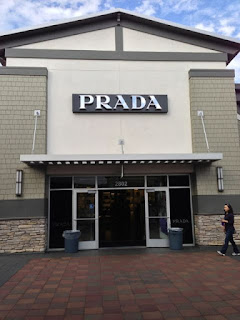 More mainstream outlets like Gap, Banana Republic, True Religion, 7 for All Mankind, Van Heusen, White House Black Market, Ghirardelli Chocolate,Gymboree, Under Armour, and Lucky are all here too. Cosmetics Company Store, the outlet for all the Estee Lauder brands, is one of my favorite places to stock up on Mac, Clinique, and Estee Lauder products...and I did. 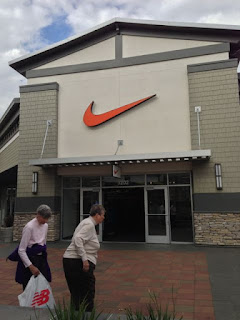 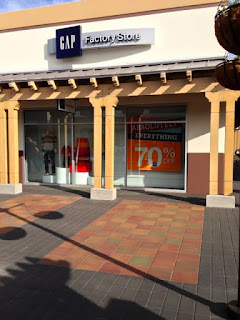 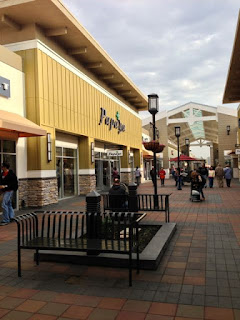 The mall is outdoors, with skylighted roofing covering most walkways. 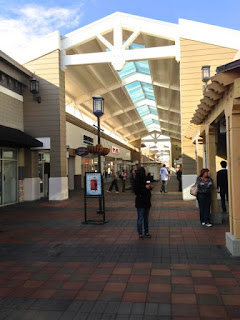 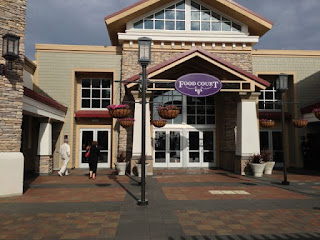 For lunch, I had a very tasty made-to-my-order salad from Greenleaf's & Bananas. 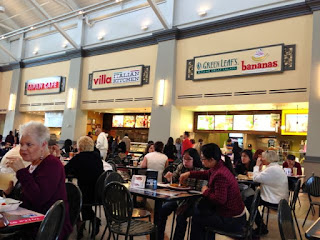 Paragon Outlets in Livermore may well be the nicest outlet mall that I've ever been to.  I will certainly be back soon.

And, if you really feel you must start your holiday shopping this year on Thanksgiving Day, Paragon Outlets in Livermore will be open at 10 p.m.!!!!