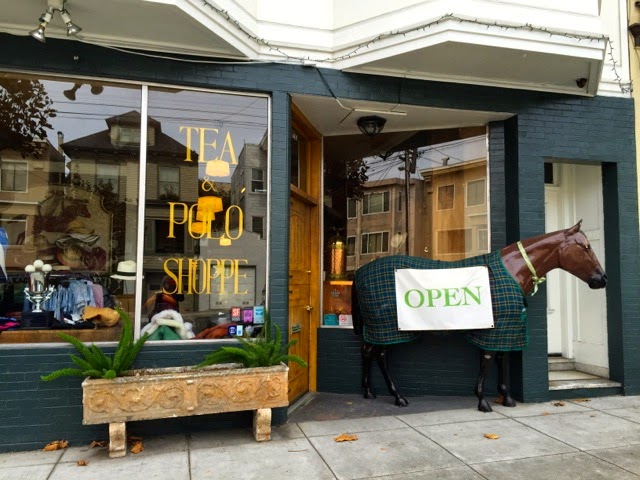 A tea room and an equestrian shop in San Francisco's outer Richmond district in a mostly-residential neighborhood?  As I walked down the block of California Street between 26th and 27th Avenues, I was more than a bit hesitant about what I would find inside this shop with a full-sized horse statue out front. This was my introduction to Tal-y-Tara Tea and Polo Shoppe.

In fact, when I saw this horse head peering out of the doorway, I seriously thought about turning around and going back to my car. 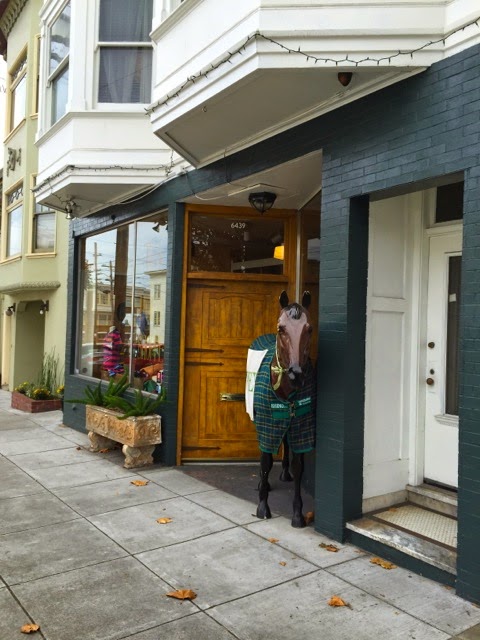 But, alas, I couldn't leave because I had invited Harriet here to celebrate her birthday with Tal-y-Tara's Queen's Tea. 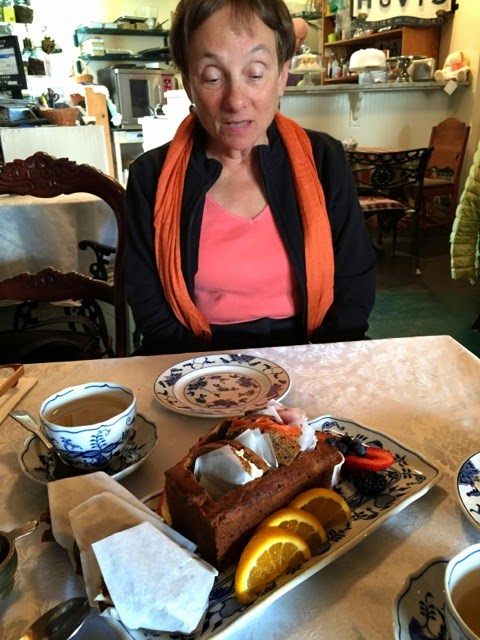 Once inside, we settled in to what turned out to be the best afternoon tea that I've ever had in San Francisco, and maybe anywhere. 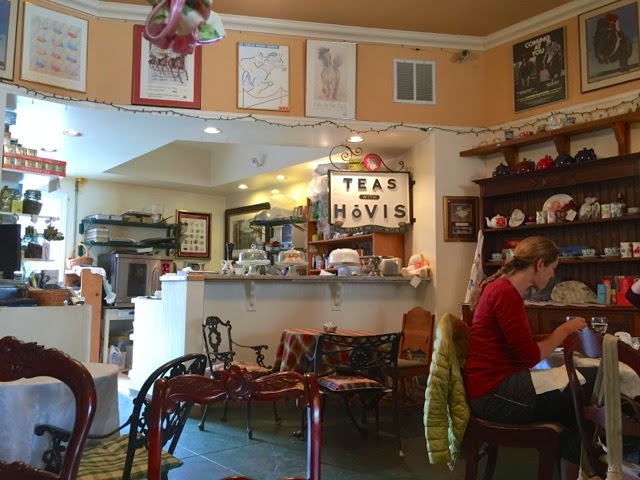 The shoppe is small and cluttered in a very comfortable way.  The front part of the shoppe features equestrian wear and gear. The tea room is at the back but there is seating throughout the shoppe, even in the front area.

The furniture is mismatched and no two tables are alike.  I felt like I was going to tea at the home of an English person whose family had lived in the place for many generations.

The menu offers several fixed price, multi-course tea services. All courses can be ordered a la carte, as well.  While we were there, some people just stopped by for a cup of tea and a scone and others came for an entire tea meal. The customers on a weekday afternoon were of all ages. All the food is prepared here. 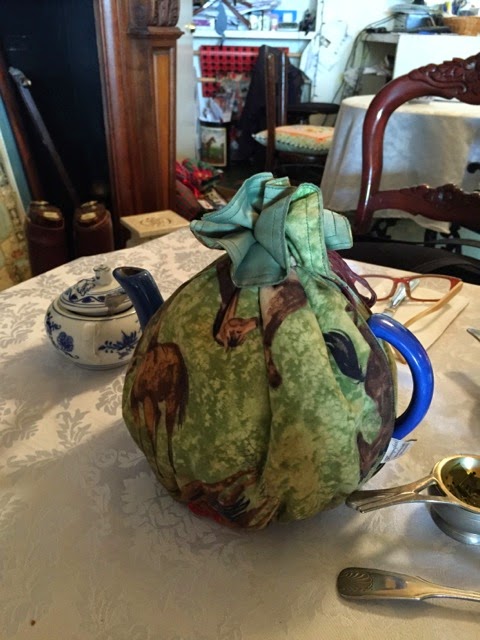 We started by ordering our tea. While we were deciding on salads and scone flavors, we were served a plate of biscotti, made from their scones.

Since we were having the Queen's Tea, our tea sandwich selections included one of each of six different sandwiches of each of us.  The sandwich bread is called a Motorloaf. Its recipe dates back at least four generations in England. The Motorloaf was traditionally used as a picnic item that could easily be wrapped up and carried when one motored off into the country.  It's a semi-sweet dark bread that contains raisins and walnuts.  The sandwiches are made from bread cut out of the center of the loaf and are served inside the loaf.  Our sandwich fillings were cream cheese and cucumber, egg salad with capers, cheese and chutney, smoked turkey with watercress, black forest ham with mustard, and smoked salmon with cream cheese and capers.

The serving plate was garnished with fresh fruits and cream cheese and butter to put on the part of the loaf that was not made into sandwiches. I noted that several customers had the loaf wrapped up to take home for later enjoyment. 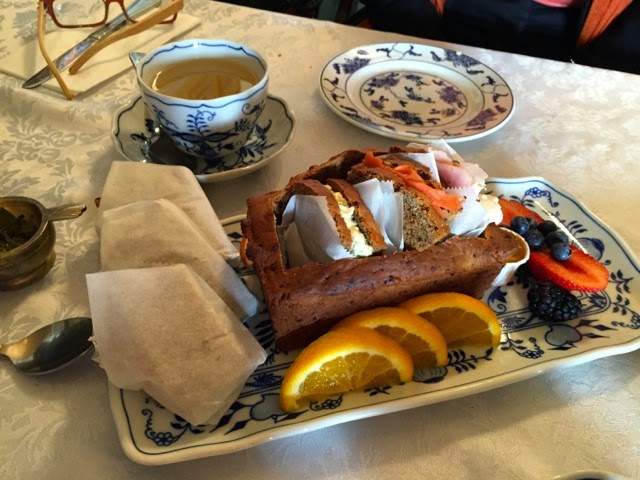 For our side salads, Harriet had the Mixed Greens and I had the Wedge with Blue Cheese and Peppered Bacon.

There were three flavors of scone available on this day.  Harriet had the Lemon Vanilla and I chose the one with Currants.  The scones are served with Devonshire Cream and Jam.

Our final course was English Trifle, a traditional sweet dessert made with cubes of pound cake, fruit jam, and a rich custard that is poured over it.

We lingered at Tal-y-Tara for more than two hours, enjoying every mouthful of our very tasty and satisfying tea.

Not only did I enjoy the freshly-prepared food, I enjoyed the personal service as well. Also, in contrast to most Bay Area complete tea services, Tal-y-Tara's is not overwhelmed by overly sweet/rich cakes and cookies.  It was just right for my tastes.

The Queen's Tea costs $39 per person. It is substantial enough to be your main meal for the day.

The Prince Harry ($25 per person) includes tea, shortbread cookies, motorloaf sandwiches, and scones. The Prince William and Lady Katherine ($35 per person) adds salads to the Price Harry. And, the Queen's Tea adds the English trifle to all of this.

Parking is free on the street and, in this part of San Francisco, it is not too hard to find a place to park.

As I walked to my car, I looked back and bid the horse farewell, with a promise to return again soon. 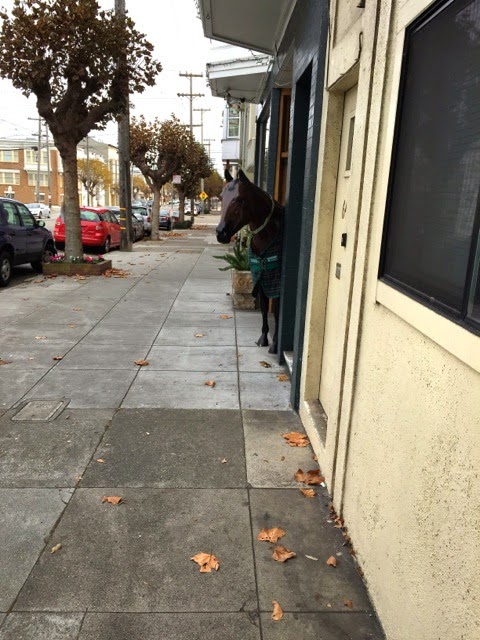 One last note:  There is currently a Groupon available for tea service at Tal-y-Tara which offers a substantial savings on your choice of tea service for two.

Once Again, I Swam A Mile for Women with Cancer 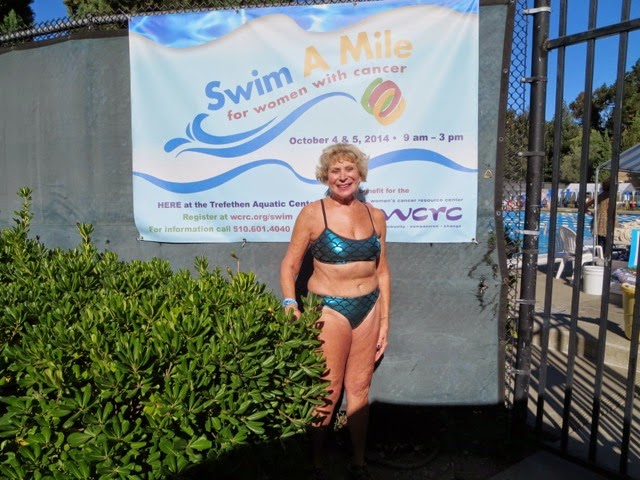 Last weekend was the Swim-A-Mile for Women with Cancer.  For my 17th year, I participated in the swim and completed the entire mile…all 72 laps/lengths of the Mills College Pool.

Thanks to all my generous sponsors, I've raised over $3600 for the Women's Cancer Resource Center (WCRC) in Oakland, California.

There are very few fund-raising events that are swims. Swimming is the activity that I do most often and regularly throughout the year. I have swum with the Walnut Creek Masters Team since 1995 or 1996 (after all these years, I've lost count). Before that, I'd had a life in the water, learning to swim as a very young child by going to the beach with my family during the warm weather months.  Swimming has always brought me joy and energy. And, when I was being treated for cancer, I kept on swimming and made my swim buddies my support group.

Once again I shared a lane with Harriet and Janet, mother and daughter, respectively. 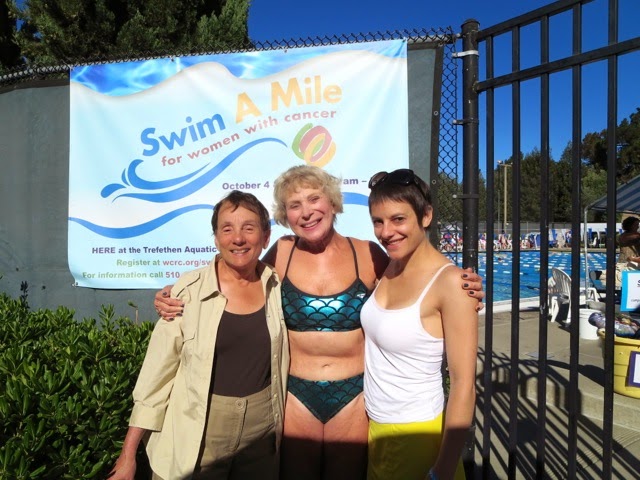 Janet, who is about to turn 40, has been a cancer survivor for nearly 8 years.

The three of us were among 630 people who did the swim over the two days of this past weekend.

Here we are ready to swim. 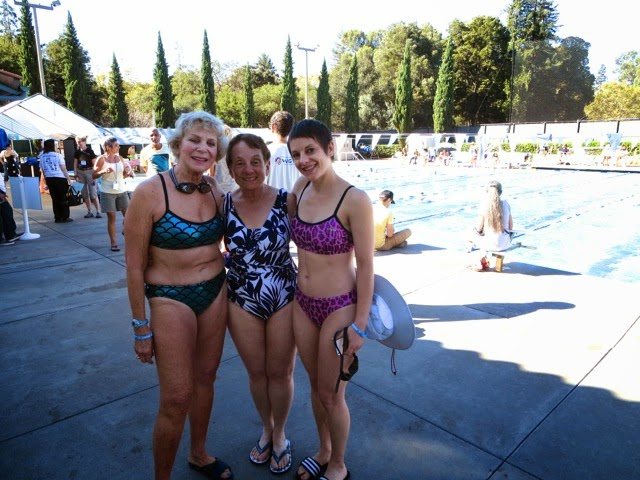 and get in the check-in line 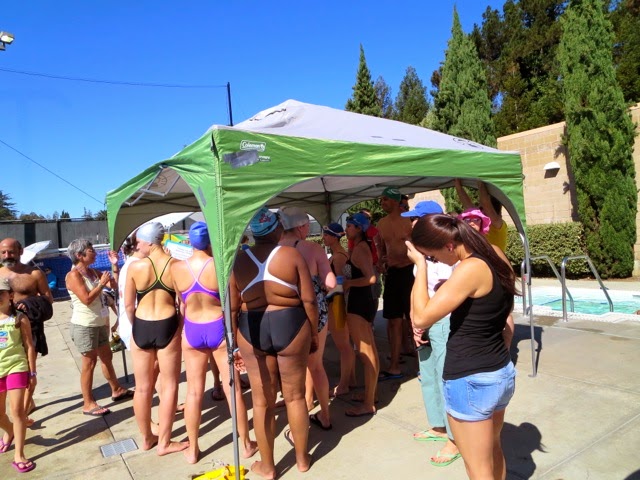 After the Swim, we celebrated. 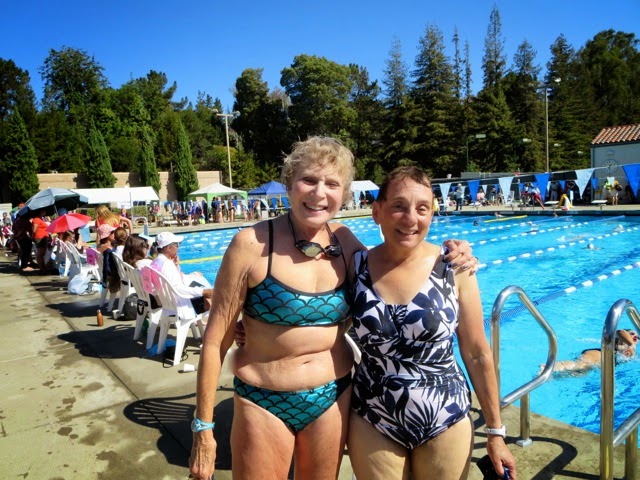 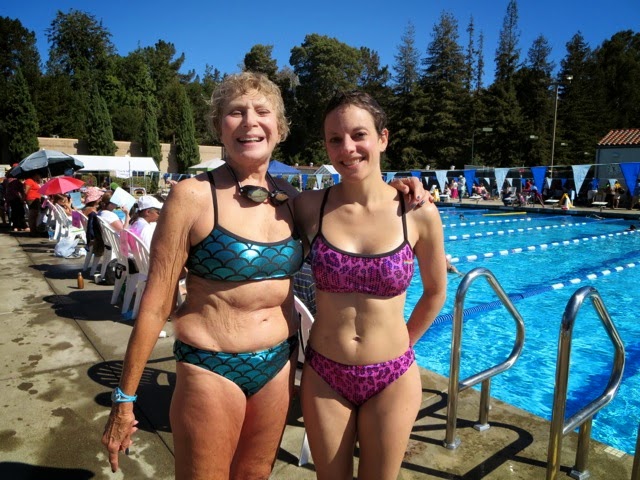 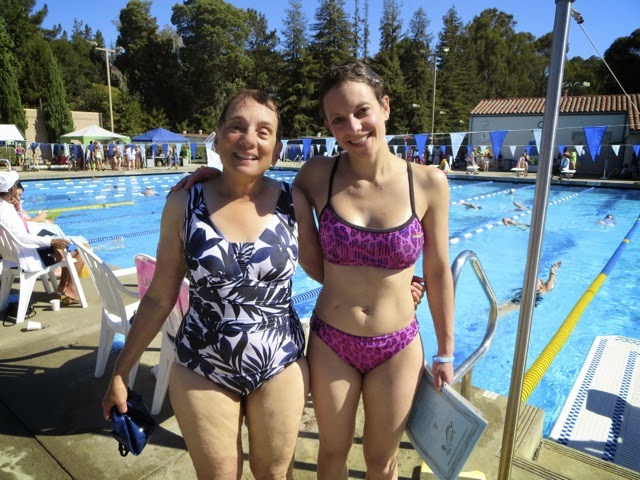 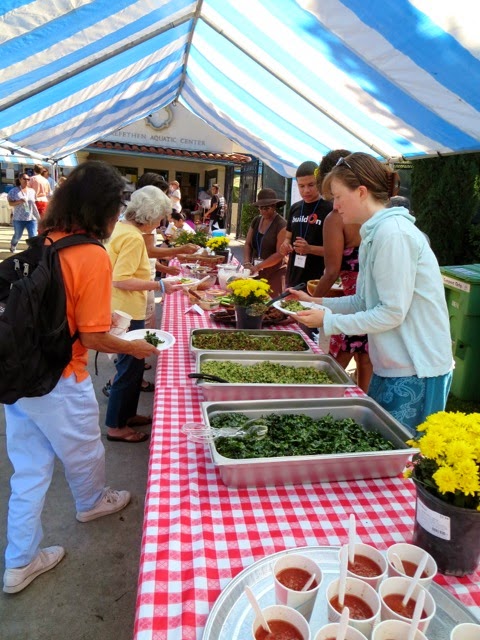 At the Swim, there is a wall where swimmers can post the names of those whom they honor and remember. I include names from those who sponsor me and and from my own ever-expanding list. This year I swam in honor of 33 people and in memory of 26 people. When I write up my name cards, I have hope that one day, cancer will just be a chronic disease that can be managed and allow those with it to live active full lives. 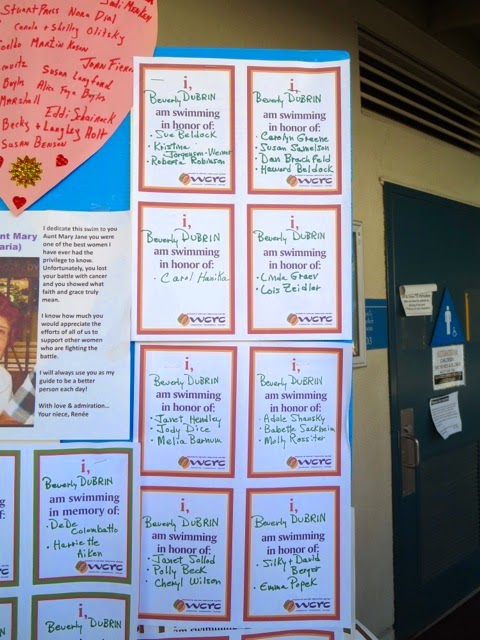 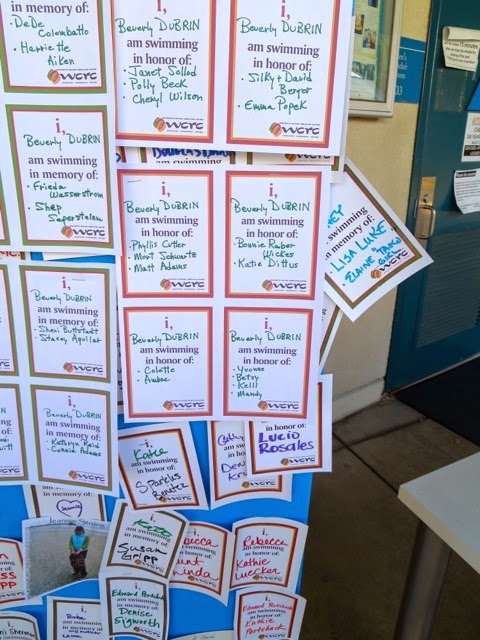 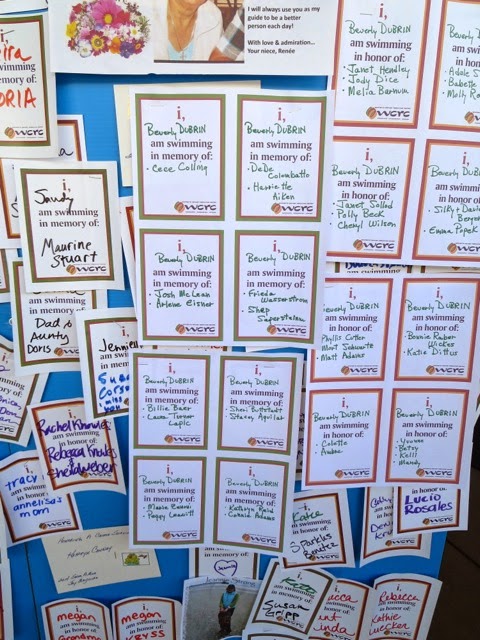 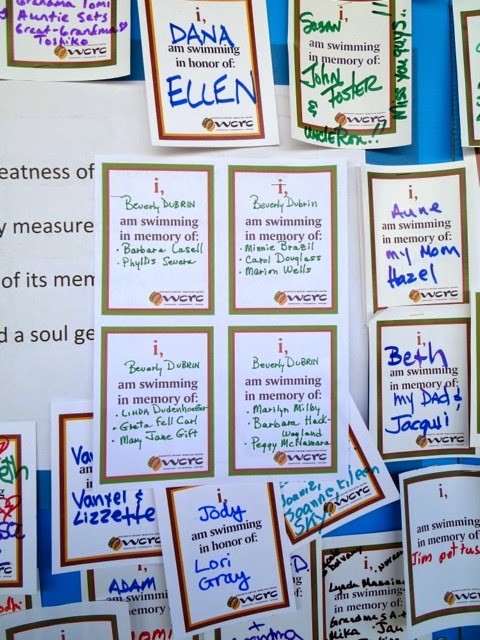 The Women's Cancer Resource Center will still accept donations to sponsor me in this year's Swim-A-Mile.  Just go to WCRC's web site and type in my name in the "Search for swimmers" box. You can also read more about the swim and about WCRC on the web site.

Maybe next year, you will join me in the pool the first weekend of October. 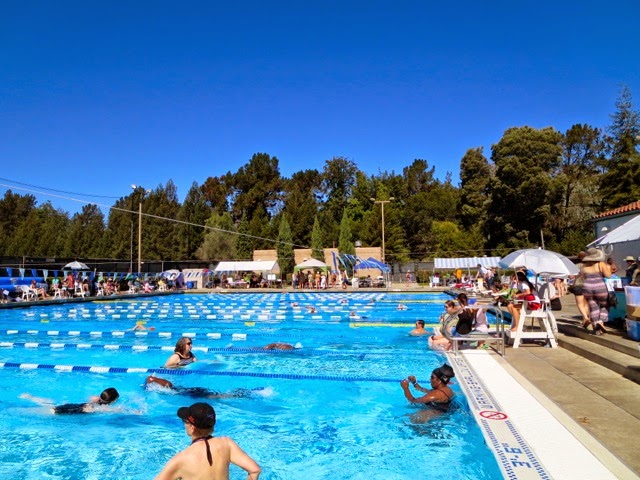 Posted by Where-To-Guide at 4:55 PM No comments: